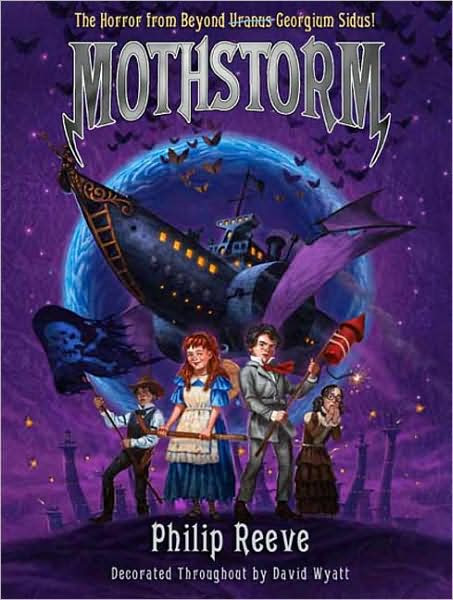 Reeve, Philip. 2008. Mothstorm: The Horror from Beyond Uranus Georgium Sidus. Or A Tale of Two Shapers. A Rattling Yarn of Danger, Dastardy and Derring-Do upon the Far Frontiers of British Space. With illustrations by David Wyatt. Bloomsbury.

First paragraph:
'Dunderhead!'
'Clodpole!'
'Ninnyhammer!'
'Booby!'
'Nitwit!'
Yes, 'twas the season of Peace and Goodwill at Larklight, and my sister Myrtle and I, snug in our fleece-lined, winter-weight spacesuits, were out upon the front porch, decorating our Christmas Tree. Christmas Trees are a German notion and quite the latest thing, but I doubt whether Prince Albert, who is responsible for introducing this charming festive fad, has ever tried to erect such a tree outside a house like Larklight, which floats about in an eccentric orbit far beyond the Moon.

I admit the above might come off as rather strange unless you're familiar with the world of Larklight. Mothstorm is the third in the series. The first is Larklight: Or the Revenge of the White Spiders!: Or To Saturn’s Rings and Back!: A Rousing Tale of Dauntless Pluck in the Furthest Reaches of Space. The second is Starcross: A Stirring Adventure of Spies, Time Travel, and Curious Hats.

Philip Reeve has created a fantastical world set during Queen Victoria's reign, but most of the action takes place in space. (Yes, space) In fact a good many of our heroes are space pirates. Art Mumby is our young narrator. Myrtle Mumby, his sister, also takes a few turns narrating the action. Where will this third adventure take the Mumby family? Are they destined for Uranus? I mean, Georgium Sidus? Off to rescue a British missionary and his daughter that have gone missing? Will Myrtle get her man, the leader of the space pirates, Jack Havock? Will Jack forget his dislike for the British government long enough to save the world from its biggest danger yet?

I love these books because they're so outrageously over-the-top fantastical. Quirky through and through. Funny. You never know quite what to expect. And that's a good thing. Because my imagination can never match Philip Reeve's that's for sure!!! I love how zany these books are. Just read the first chapter about when their Pudding goes rogue!

The adventures are fun. No doubt. But what keeps me a fan is Philip Reeve. I just love his sense of humor. I love his style. He has a way with words. He's just a great storyteller.


© Becky Laney of Becky's Book Reviews
Posted by Becky at 8:00 AM

I am so in love with these books. And so excited that MOTHSTORM is out! I must get my hands on a copy at once!

I'm glad you're enjoying this series as much as I am. I've heard rumors this is the final book in the series - I sincerely hope not! In any case I have the first book in Reeve's Mortal Engines series to read soon. Have you read that one?