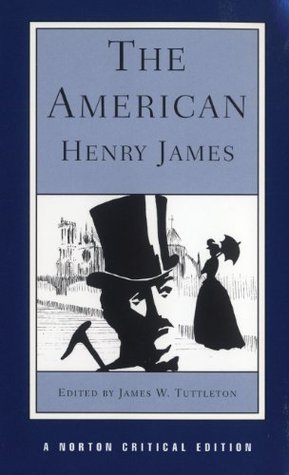 First sentence: On a brilliant day in May, in the year 1868, a gentleman was reclining at his ease on the great circular divan which at that period occupied the centre of the Salon Carré, in the Museum of the Louvre.

Premise/plot: Christopher Newman, a successful American businessman, is visiting Europe. The novel opens with him in Paris, France. His short term mission is to spend money and enjoy himself. His long term mission is to find a beautiful, perfect wife in the process of visiting Europe and taking in "culture" and "class." He meets a friend, Tom Tristram who takes him home to meet his wife. Mrs. Tristram takes it upon herself to help Newman with his short and long-term goals! She has just the potential wife in mind, a countess from an ancient family, a widow: Madame de Cintré.

He meets her; he meets her family; he goes about wooing her family in hopes that with her family's approval, all will be well.

Her family is SCARY. Not just slightly odd and off-putting, but, the stuff of nightmares. Well. There's one brother who has potential, but...expect this courtship to be anything but smooth.

My thoughts: The American is very depressing. I wonder if Thomas Hardy read it and approved of its bleakness?! I'm so glad that it was the third novel I'd read by James and not the very first.

Did I like Christopher Newman? I'm not sure I did. He was very materialistic and talked about money non-stop. His wooing left a little to be desired in my opinion. He was all, I'm rich; My money makes me quite a catch; You'll never want for anything because I have money, MORE money, EVEN more money. My money will make us both extraordinarily happy. We can live anywhere we want and do anything we want because I have MONEY. I'm not sure if he genuinely loved for all the right reasons. She met his checklist of ideals--but his ideals were all superficial to begin with. She was much more complex than he was expecting. And money couldn't buy him understanding on how to deal with a complex woman.


“Present me to a woman who comes up to my notions,” said Newman, “and I will marry her tomorrow.” “You have a strange tone about it, and I don’t quite understand you. I didn’t suppose you would be so coldblooded and calculating.” Newman was silent a while. “Well,” he said, at last, “I want a great woman. I stick to that. That’s one thing I can treat myself to, and if it is to be had I mean to have it. What else have I toiled and struggled for, all these years? I have succeeded, and now what am I to do with my success? To make it perfect, as I see it, there must be a beautiful woman perched on the pile, like a statue on a monument. She must be as good as she is beautiful, and as clever as she is good. I can give my wife a good deal, so I am not afraid to ask a good deal myself. She shall have everything a woman can desire; I shall not even object to her being too good for me; she may be cleverer and wiser than I can understand, and I shall only be the better pleased. I want to possess, in a word, the best article in the market.”

“I told her something about you,” said Mrs. Tristram. “That’s a comfort,” said Newman, placidly. “I like people to know about me.”


Did I like Madame de Cintré? I pitied her at the very least. Here was a woman whose thoughts and feelings were never allowed to matter or count for anything. She was manipulated by her mother and her older brother. Commanded more than manipulated perhaps. Even as a widow she wasn't allowed to be herself. I wanted her to be respected and valued. Respected for who she was as a person, her character. Valued for who she was, not for what she looked like.


To be unhappy is to be disagreeable, which, for her, is out of the question. So she has arranged her circumstances so as to be happy in them.

She was not the only unhappy female character. I think all of them--in varying degrees--were living stuck lives. But to be fair--with the exception of Tom Tristram, who was presented as just not getting it, men and women alike were more often than not miserable and unhappy. This novel definitely shares themes with the book of Ecclesiastes.

My favorite character was her brother, Valentin de Bellegarde. This was the good brother; not the horrible controlling one. This is the brother who genuinely enjoyed Christopher Newman's company and wanted the best for his sister.


You may depend upon it that there are things going on inside of us that we understand mighty little about.

When you want a thing so very badly you had better treat yourself to it.

One’s theories, after all, matter little; it is one’s humor that is the great thing.

His mind could no more hold principles than a sieve can hold water.

It is better to laugh too much than too little.

When the heart has a heavy weight upon it, it hardly matters whether the weight be of gold or of lead; when, at any rate, happiness passes into that place in which it becomes identical with pain, a man may admit that the reign of wisdom is temporarily suspended.

“I shouldn’t like to resemble anyone. It is hard enough work resembling one’s self.”

“It is a proof of cleverness,” said Newman, “to be happy without doing anything.”

I suppose that a man who may be liked may also be disliked.

When was a man ever gloomy when he could say, ‘I told you so?’