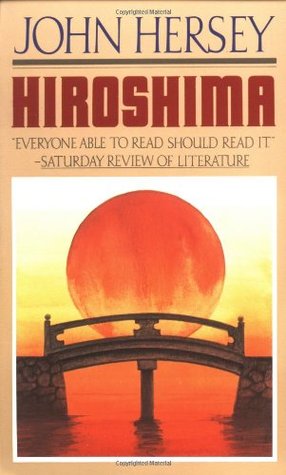 First sentence: At exactly fifteen minutes past eight in the morning on August 6, 1945, Japanese time, at the moment when the atomic bomb flashed above Hiroshima, Miss Toshiko Sasaki, a clerk in the personnel department of the East Asia Tin Works, had just sad down at her place in the plant office and was turning her head to speak to the girl at the next desk. At that same moment, Dr. Masakazu Fujii was settling down cross-legged to read the Osaka Asabi on the porch of his private hospital, overhanging one of the seven deltaic rivers which divide Hiroshima; Mrs. Hatsuyo Nakamura, a tailor's widow, stood by the window of her kitchen, watching a neighbor tearing down his house because it lay in the path of an air-raid defense fire lane; Father Wilhelm Kleinsorge, a German priest of the Society of Jesus, reclined in his underwear on a cot on the top floor of his order's three story mission house, reading a Jesuit magazine, Stimmen der Zeit; Dr. Terufumi Sasaki, a young member of the surgical staff of the city's large, modern Red Cross Hospital, walked along one of the hospital corridors with a blood specimin for a Wassermann test in his hand; and the Reverend Mr. Kiyoshi Tanimoto, pastor of the Hiroshima Methodist Church, paused at the door of a rich man's house in Koi, the city's western suburb, and prepared to unload a handcart full of things he had evacuated from town in fear of the massive B-29 raid which everyone expected Hiroshima to suffer. A hundred thousand people were killed by the atomic bomb and these six were among the survivors.

Premise/plot: Hiroshima by John Hersey chronicles the dropping of the first atomic bomb. It was first published in 1946. Later editions of the book provided more up-to-date information on all six survivors.

The first three chapters closely follows events in August 1945. Through the eyes of six survivors, the reader bears witness to the unthinkable: the initial bomb, the wreckage left behind, the injuries, the fires, the floods, etc. The fourth chapter follows the first few months--or perhaps even the first year after the bomb. Again, through the survivors' accounts readers learn of the effects of the bomb. The day in and day out effects of the bomb on men, women, children, babies. If you're ill--very ill, perhaps even dying--how do you find work, keep a job, earn enough money to pay for food to feed your family? How do you recover your life--and have things return to normal? It's a learning process not just for victims but for the medical community as well. The fifth and final chapter was added to the book in the 1980s, this chapter serves as an epilogue. Readers see how the six managed to live for the next few decades after the bomb.

My thoughts: This one left me speechless. How can I do it justice? It is a difficult read--an intense one. Hiroshima would pair well with Alas, Babylon or Your Sins and Mine.
© 2017 Becky Laney of Becky's Book Reviews
Posted by Becky at 9:00 AM