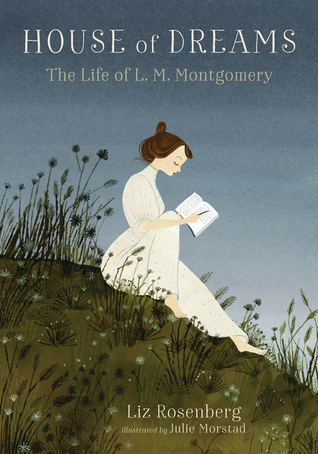 First sentence: On a late June afternoon in 1905, Maud Montgomery sat in her grandmother's kitchen, writing. She sat not at the kitchen table, but perched on top of it, her feet set neatly on a nearby sofa, her notebook propped against her knees. From here she could jump down if someone stopped by for their mail, as was likely to happen--for the kitchen doubled as the post office of Cavendish, a tiny seaside village on Prince Edward Island.

Premise/plot: House of Dreams: The Life of L.M. Montgomery is a new biography of Canadian author, Lucy Maud Montgomery. Montgomery is best known for the Anne series though she was also a poet and writer of short stories.

My thoughts: L.M. Montgomery is one of my favorite authors. Around the age of eleven (or so) I discovered the Anne and Emily books. It was LOVE. I reread these books often. (And I do mean often.) At some point I began reading her other books as well--Tangled Web, Blue Castle, various short story collections. I entertained the fantastical notion that if I had a real, live Anne Shirley in my life, my life would be so much better. Not only did I see Anne as a kindred spirit--but I imagined L.M. Montgomery to be one as well.

I would not allow my eleven year old self to read this book. I wouldn't. There's a time and place perhaps for illusions to be shaken perhaps. I am not saying I regret reading the book as an adult.

But even if she had come forward and sought help and sought help for her husband, would the medical community have been of any real good? I’m not convinced. What prescriptions Montgomery and her husband were taking—for various things—were (way) more harmful than helpful. Though they perhaps didn’t ever realize it.

We like to think that we know all there is to know--that medical science has made great advancements. That a doctor's advice is always good advice. That prescription pills are safe. That when a doctor prescribes something it will make us better--not worse. Only time will tell. It will always only be time that tells.

Still even if we don't know everything there is to know about every mental health disorder today--we know so much more than a hundred years ago. It can be outrageous to stop and think about what "treatments" were recommended for the mentally ill--even sixty or seventy years ago.

I do think it is important to talk about mental health. To be compassionate and empathetic--not only to those suffering directly from mental health disorders but also towards the caretakers--the friends and family of those impacted. It is nothing to be ashamed about. It shouldn't be something to hide, a burden one bears alone.

Did Montgomery commit suicide? Yes. No. Maybe. She was certainly VERY unhappy and life was a burden to her. She was worried and anxious about her oldest son. She was miserable with her husband. Recent injuries made it difficult for her to write by hand. She'd endured many losses in life. But did she overdose by pills intentionally or unintentionally? It could have been an accident. (She was taking SO many different prescriptions, and the combination would today be considered dangerous. Even if she was following doctor's directions precisely.) It could have been suicide.

It wasn't Montgomery's mental health problems that troubled me so much as it was the breaking of the illusion that Montgomery was a [Christian] woman of faith. She may have grown up at a time and in a place where church attendance was a given for respectable families. Perhaps she even confessed/professed faith as child or teen. But by the time she was an adult, by the time she was a minister's wife, she had lost her belief in God. Or at least her belief in the God of the Bible. She denied there was a heaven or hell, a day of judgment. She believed instead in reincarnation. She maintained an appearance of orthodoxy--as did her husband--for appearances' sake. After all, would he be kept on as minister if he openly rejected God from the pulpit? But she held unorthodox views privately. Some of this creeps in subtly in her works.