The Romanov Empress. C.W. Gortner. 2018. 431 pages. [Source: Review copy]
First sentence: "We should dress alike," I said on that afternoon when life changed forever. I didn't yet understand how profound the change would be, but I could feel it as I sat riffling through the heap of boxes sent by Copenhagen's and London's finest emporiums, packed with satin-bowed shoes and beribboned hats, silk undergarments, dresses, corsets, shawls, leather gloves, and cloaks made of fine cashmere or Scottish wool.

Premise/plot: The narrator of this one is Maria Feodorovna (aka Minnie, aka Princess Dagmar of Denmark, aka Empress of Russia). Her husband was Emperor Alexander III. Her son was Emperor Nicholas II--the last tsar of Russia. She was a daughter, sister, princess, wife, mother, widow, mother-in-law, grandmother, empress, and dowager empress. The novel is written in first person--for better or worse. And this one spans decades. 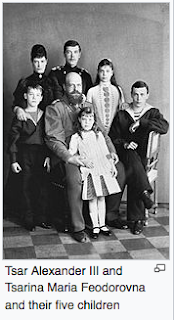 My thoughts: I wanted to love this one. I wanted to be swept up, up, and away into this historical novel featuring several royal families. I wanted to find the narrative captivating, fascinating, intriguing, compelling--anything and everything but dull. To be honest, the book isn't dull so much as it is un-exciting.

I felt several degrees removed from all the action, from all the drama. Perhaps the narrative was supposed to reflect the poise, the dignity, the restraint, the respectability, the polish of the Empress? Perhaps the purpose was to focus solely on the interior thought life of a woman and not really get into the ACTION and DRAMA of the times in which she lived? I'm not sure.

It was interesting to read a book about the Romanovs from the perspective of a survivor. It didn't make the book less sad, less tragic. It was her son. It was her grandchildren. Obviously most--if not all--of her concern was towards their safety and not her own. She wasn't worried about herself--but them. How could they be saved? How could they be rescued? How could they be smuggled out of the country? She was out of touch--for the most part except for a few smuggled letters--with the people she loved most in the world. Their lives were in danger and she knew it. She lived with it. The last section of the book was the most intense. It almost made up for the dullness of the other five sections.

I would definitely read a nonfiction biography about her. I think her story probably is worth reading. But perhaps fiction wasn't the way to go--for me.