The Race to Save the Romanovs 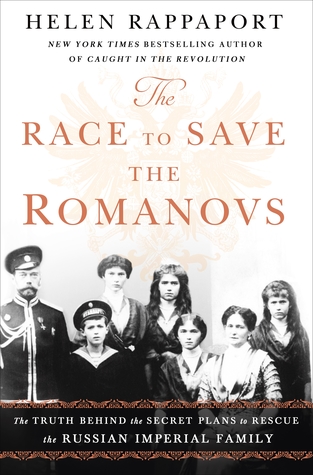 The Race to Save the Romanovs: The Truth Behind the Secret Plans to Rescue the Russian Imperial Family. Helen Rappaport. 2018. 464 pages. [Source: Library]

First sentence: In April 1894 the last of a succession of royal dynastic marriages engineered by Queen Victoria as 'Grandmama of Europe' took place in Coburg, the capital of the German Duchy of Hesse and by Rhine.

Premise/plot: The title says it all. This one is about "the race" to "save" the Romanovs. Of course, the Romanovs were not saved. There may have been many people from quite a few countries talking about trying to save, making plans and plotting. Though they had a LOT of relatives in MANY countries across Europe, there is ongoing debate about which countries were willing to welcome them and accept them and which countries decidedly did NOT want them.

This one asks questions: Could the Romanovs have been saved? Why weren't the Romanovs saved? Why were there no real attempts made to get them out of Russia and safely into another country? Was there more talk than action? How can you know what is actually true and what is myth?

All "attempts" to save them have to figure out HOW to get them out of Russia (by sea, by land) and WHERE they will go--which country will take them in and welcome them. Rescue attempts must be well thought out and possible. This isn't Star Wars.

Essentially her response is that there are many, many, many factors to consider. It would never have been an easy matter to get the whole family out of Russia. Not all members of the family were in good health and up to the trip--at least not all the time. Other factors include: the military and political factions warring within Russia, the warring nations without, the mob(s) that have been hating on the family for decades, transportation logistics (how to get them from point to point to point until they are safe), WEATHER, the emotional and mental states of the family. Weather, for example, limited rescue attempts to certain weeks or months of the year. To carry out a plan would require meticulous planning and no mistakes. (Thousands of things could go wrong.) As far as the mental/emotional health of the family goes, did the family want to be rescued if it meant permanent exile? did they welcome attempts that would separate the family? were there countries they were unwilling to live? Did they want to be "rescued" but only on their own terms?

Rappaport essentially argues that there is no one person responsible for their deaths. King George V though often blamed for failing to save them is not solely responsible. It was not in his power to save them. Even if he had wanted to save them, even if he was willing to risk political instability in his own country, even if he was willing to keep pursuing a rescue, there never would have been a guarantee that the Romanovs could have been saved in the end. No one monarch, no one country could have managed it. Too many factors were involved. Together--united as one, working seamlessly together--perhaps, perhaps.

My thoughts: I needed to put this one in the freezer. It was a hard read at times. You can know it's coming and know it's coming and still be surprised by your response when it actually happens. Her ultimate conclusion is that from the moment Nicholas II abdicated, the family was doomed.