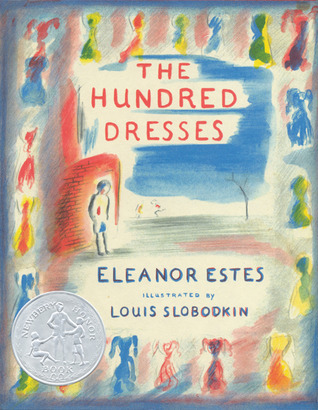 First sentence: Today, Monday, Wanda Petronski was not in her seat. But nobody, not even Peggy and Madeline, the girls who started all the fun, noticed her absence. Usually Wanda sat in the next to the last seat in the last row in Room 13. She sat in the corner of the room where the rough boys who did not make good marks on their report cards sat; the corner of the room where there was more scuffling of feet, most roars of laughter when anything funny was said, and most mud and dirt on the floor.

Premise/plot: The heroine of Eleanor Estes' The Hundred Dresses is a young girl named Maddie. The book chronicles her awakening of conscience. Peggy and Maddie began "having fun" with Wanda Petronski several months before this chapter book opens. Fun. That's how Peggy sees it. And perhaps that's how Maddie viewed it the first few times. But lately Maddie has been thinking the "fun" they're having is wrong--is in fact unkind. But if she spoke up to Peggy, would Peggy listen to her and stop? Or would Peggy turn her back on her? Would Maddie lose her best friend?

Maddie comes to think it is. But her change of heart may be too late. Will Wanda ever know that Maddie is sorry for the way she's behaved?

My thoughts: I first read this one a few years ago. I think I love it even more now upon second reading. The book has a gentleness to it, but don't underestimate the power of meekness. This book has a message for young readers.

Maddie. This is a coming-of-age for Maddie. It is her character growth the book chronicles. Maddie was not "the instigator" of the bullying. She was a follower--a somewhat reluctant participant. But by the end of the book Maddie realizes that even observing "the fun" and standing by and doing nothing--saying nothing--is a wrongful act. Maddie realizes her own cowardice, her own weakness. She makes a resolution to change, to be a better person, to make amends, to never follow the crowd again, to always do what is right no matter what.

Peggy. This is the girl we know the least about. We know that she is one who first started teasing Wanda. But we don't know her heart--just her actions. Did she know it was wrong? Did she stop "the fun" only because Wanda moved away, or did she too experience a change of heart? I get the impression that she feels guilty, but not the impression that she's genuinely repentant and wanting to make amends. If Maddie wasn't so eager to make amends, would Peggy's guilty feeling last all that long? We just don't know. We can guess. But we can't know.

Have you read the Hundred Dresses? What did you think of it?!

I always enjoyed this author but The Hundred Dresses was not a favorite when I was a child; it seemed like nothing really happened. I like your perspective.

There is a chapter in Rufus M about his first library card that made a huge impression on me. I was somehow about to cite it in a graduate school economics paper which made me feel I was improving the entire field of a very dull subject.