All I Really Need To Know I Learned... 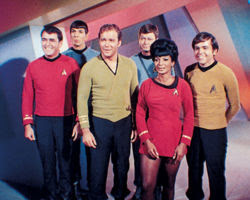 Marinaccio, Dave. 1994. All I Really Need to Know I Learned From Watching Star Trek.

It isn't true. At least not for me. But the book is funny. And light. And enjoyable. And there are laugh-out-loud funny moments where it is pure joy to read. The author, Dave Marinaccio, is in advertising. He apparently uses/used Star Trek references every day on the job. And he's from that generation--the generation where Star Trek was the best, the coolest, most awesome thing ever to be on tv. Me? Not so much. Star Trek was on when I was a kid--in reruns of course--but it was always past my bedtime. Sure, there were a few occasions where I was 'allowed' to watch the opening credits...but that is about as far as my exposure went. I do remember probably being ten or eleven when a weekend marathon of Star Trek came on. I remember watching a few episodes then. But exposure to two to four episodes does not a true fan make.

I started watching the original series of Star Trek in 2006. One of the local channels started carrying reruns on Sunday nights. One new episode. One repeat episode. (The repeat being the episode that ran the week before.) So slowly but surely, my exposure was growing. Then my dad and I chanced upon two seasons of Star Trek used. The time had come. (The third season I used one of my Borders coupons to get for those dying of curiosity). He, of course, had watched the show as a kid/teen. He knew every episode backwards and forwards. So Star Trek became a part of my life. I should amend that to the original Star Trek show became a part of my life. We watched the first two seasons of the show within a period of three or four months. (We're still not done with the third season. We've lost momentum.)

For me, the show is not a great work of art like Marinaccio enthusiastically proclaims it to be. It is absurdly funny. The dialogue is laughable. The costumes and makeup of the aliens are often nonsensically comical. The fact that Kirk will fall in love (and make out) with the female of practically any humanoid species no matter how evil OR how ugly is ridiculous. (Ugly hags with green or blue hair???? Really???) And there are many times when watching him on screen I am just overwhelmed by how bad the acting is. But it's an enjoyably stupid show. A show that while absurd-to-me genuinely reflects a part of our cultural heritage. Like eating Chef Boyardee Ravioli as a grown-up. Like reading the Babysitters Club books as an adult. There are probably five or six episodes that I really love. But the rest just range from average to rolling eyes and cringing. (The episode where Spock plays music and sings a song while alien hippies take over the ship. Who wouldn't cringe???)

Of course, Marinaccio's point is that you should NEVER fear the unknown. That you should boldly encounter new things--people, places, circumstances--boldly. No fear. He thinks Star Trek teaches you or shows you that you should have no fear. I disagree. Cautious is better than bold in most circumstances. Maybe not for a starship captain. But for the rest of us on Earth. Better caution and careful preparation for facing the unknown...than to rush into situations you know nothing about.

"Anyone with even a passing interest in Star Trek should know this rule: Never, ever, ever wear a red shirt--not under any circumstances. Don't do it. Pick any episode, Captain Kirk, Mr. Spock, a series regular like Uhura and some guy you've never seen before are standing on the transporter pad. If the guy is wearing a red shirt, he will not live past the first commercial. Somewhere on the planet below certain death awaits. I've watched these guys in red shirts get shot, be blown up, be disintegrated, have all their blood drained, have every cell in their body explode and otherwise meet the most painful and horrible deaths imaginable. The endings aren't even especially heroic. First a guy beams down, then he's dead. At least it's usually quick. Nine times out of ten, the poor fellow doesn't have a clue what hit him. Within seconds, Bones examines the fallen crewman with a tricorder, turns to the captain and says, 'He's dead, Jim.' By the next scene it's as if the guy never existed. There's no wake, no funeral and most of the time his name is never spoken again." (68-69)

Cultural heritage indeed. I was born about twenty years before you were, and I still didn't see Star Trek in its original incarnation. However, I think some of Captain Kirk's romantic relationships were Trek's attempts to make a statement about race relations, a subject which was a hot topic in America in the 60's and 70's when the show was made.

I'm not a real Trekkie either, but I think the book might be informative.

Well, I think I've seen just about every episode. I'm more of a TrekkER myself (Next Generation -- I was even a member of the officil fan club!) but I find entertainment and amusement from the original show. I laughed over the advice never to wear a red shirt. Hilarious! Thanks for sharing.