Here is a challenge anyone can make time for because it is only to read ONE book. 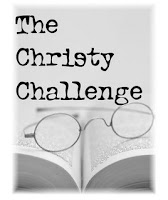 Shauna from ShaunaRumbling is hosting The Christy Challenge. It started in early June (the announcement posted June 8th), and will continue through July 31, 2007. The goal? For participants to choose a book (or two) from the Christy Award list--either this year's nominated titles OR previous award-winners. If you are interested in participating yourself, you can visit the Christy Awards site.

Here are this year's nominees:

* The Brethren by Beverly Lewis (Bethany House, a division of Baker)
* Escape from Fred by Brad Whittington (B&H Publishing Group)
* The Proof by Austin Boyd (NavPress)

HISTORICAL (includes four titles due to a tie)

* The Measure of a Lady by Deeanne Gist (Bethany House, a division of Baker)
* Monday Morning Faith by Lori Copeland (Zondervan)
* The Redemption by M. L. Tyndall (Barbour)