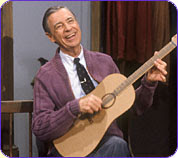 I often used to tease my mother that certain talk shows were above her maturity level. That she just couldn't watch them without getting upset and shouting and yelling at the tv. Little did I know that one day that would be me. Only this time, it's a newspaper article. Blame It On Mr. Rogers: Why Young Adults Feel Self-Entitled. This article is completely nonsensical. And knowing that, I should be able to let it go, right? Right? I mean why waste one moment of thought on such a stupid argument? Hence why it is above my maturity level.

Fred Rogers, the late TV icon, told several generations of children that they were "special" just for being whoever they were. He meant well, and he was a sterling role model in many ways. But what often got lost in his self-esteem-building patter was the idea that being special comes from working hard and having high expectations for yourself.

But that assessment of Mr. Rogers is false. It wasn't the idea that kids were deserving of praise all the time. And his use of the word special wasn't that of perfection and praise. It was more in the sense of being unique, of being valuable. You are not just a nameless, voiceless person whose identity and worth are insignificant in this world. There is only one you. NOwhere in that message was it stated or implied that that "you" was better than anyone else. Mr. Rogers didn't teach or imply in anyway whatsoever that your uniqueness as an individual gave you the right to special treatment. It was all about equality. Sure you're special. But so is your brother, sister, classmate. Everyone is "special" in the sense that they are a unique individual with a unique personality. It wasn't so much that he was teaching children to love themselves and only themselves. He was teaching them to love themselves AND to love those around them. It was about being emotionally responsible. About showing compassion. About being understanding. About being forgiving. About sharing. About getting along with others. About communicating. About being patient. About teamwork. About self-control. "Special" never meant better. And it never meant there was no room for improvement. (Like the article implies.)

When you think of the words "entitlement" what do you think of? I think of children and teens who feel "entitled" to have their parents buy them anything and everything they want. If they're young that means that they have every toy that they've ever expressed interest in. If they're older it means that they've convinced their parents to give them every cd, dvd, gadget, etc. And in many cases even a car. Or perhaps they expect their parents to pay for their college tuition. For their parents to go into debt so they can have the latest and the best of everything. They feel they deserve whatever they want because they've never been told no. They've never been taught the value of a dollar. Whose fault is that? Is Mr. Rogers to blame for the parents lack of common sense? If a parent can't say no to a child, and if a parent can't set boundaries for a child...is that anyone else's fault but his/her own?

Mr. Rogers was never materialistic. That's not who he was. He embodied simplicity. The man had the same curtains and furniture for however many years--decades--it was. He was never about having the latest and the best. His message was never "you need more stuff to be happy*." If today's young adults have that message...they weren't getting it from Mr. Rogers. Chances are they weren't getting it from any public television broadcast.

I think this problem of self-entitlement goes back much further than that. It's not this generation that is showing the first signs. This isn't a new problem. Most adults have this problem as well. Why else are there so many people--of all ages and generations--in financial debt? If people didn't feel "entitled" to things that they couldn't afford to pay for today, then they wouldn't be charging up such huge amounts on their credit cards. People want what they can't afford. And they don't want to wait. Pure and simple. They don't want to wait. They don't want to work. They don't want to do things the responsible way. If kids and teens have a sense of entitlement, it is because that is the lifestyle they see their parents live day in and day out year after year.

I think this goes back to the Depression. People of that generation that were growing up lived with little. They didn't get everything they want. They were happy with whatever they could get. They were happy to have enough to survive. They lived in poverty. They didn't expect someone to hand them all of life's luxuries. They often worked--either around the house or actually doing small jobs--and contributed to their family. They didn't expect something for nothing. However, when this once-deprived generation began to grow up and have children of their own, they wanted to indulge their children. They didn't want them to have to go through the same hardships. If their child wanted this or that--something the parent had never had the pleasure of having as a child--they wanted to say yes. While this generation worked hard to give their kids everything they wanted, their kids didn't particularly go out of their to learn this same work ethic. And then that generation began growing up and having kids...except that they had grown up feeling entitled and passed on the same. Etc. and so forth. You can see where this is going. It is parents who model how to act, how to behave, how to SPEND. If parents don't teach their kids the meaning of hard work, discipline, responsibility...and if they cater to their every wish and desire....then they shouldn't be surprised when they act entitled.

No person automatically deserves the fine things in life like a big-screen HDTV just by virtue of being born "special."

Obviously, the author of this piece is under the assumption that the rising generation actually *watched* Mr. Rogers. My sister didn't watch Mr. Rogers, and she's 8 years younger than I am (I did, for the record). I can't believe that those who consider themselves entitled actually watched this show. I don't know what was on PBS between 1986 and 1996, but I don't think it contributed to the entitlement escapism that's prevalent today.

Sounds to me like someone needs to play the blame game.

As Leila (at bookshelves of doom) said: BAH!

I totally agree! Now, I don't care for Mr. Rogers very much -- his voice always grated on me a little bit -- but you can't blame America's problems on him. He has always stood for the promotion of self-esteem, gentleness, kindness, and respect. The only thing I blame him for is the dumb cat puppet who meows incessantly instead of talking like a normal puppet!

excellent post! You made great points and I agree completely. Nicely argued.

Everyone wants to blame the media, but never did I think someone wanted to blame Mr. Rogers! It's almost comedic.

We need to take responsibility for our actions. We can't blame everything on media because real life is way stronger than any fantasy. Blaming things on media is giving it way too much credit, so it's refreshing to read your theory about the Depression.

of course! let's blame mr. rogers. why didn't i see it before?

what will they come up with next?