Releasing in paperback this August, AngelMonster is the exciting behind-the-scenes story of Mary W. Shelley and Percy Shelley. Mary was just sixteen when a young--but married--poet came into her father’s bookshop. The daughter of quite a famous--and radical--woman, Mary held much appeal to this romantic poet. Percy began pursuing her quite openly. Their chaperone? Mary’s stepsister Jane who was around the same age. Two young girls in love with the idea of love.

He might adore us all, but I adored only him. Handsome, brave, rebellious, gifted, and adhering without scruple to the principles of both my parents’ writings, he could do no wrong. Freedom for slaves! Freedom for women! Freedom from marriage! Freedom for all to love as, when, and where they will! And a freedom of his own, his championship of which impressed me more than any other. Freedom for the human race to live without the tyranny of religion! To my eyes he was beyond doubt a genius. I did not, indeed I could not, resist his charm. I saw no one but him, dreaming or waking. My eyes did not function unless he was there for them to look at. I fell in love so madly I almost did not recognize it as love. It was madness and nothing else. (34-35)

How strange. However much we plan, and hope, and map things in our minds, life never reads the same script as we have prepared. It tears up our predictions and laughs at us for presuming to make them. (40)

Percy Shelley had eloped with his first wife when she was but sixteen and pregnant. History repeated itself. After Shelley’s “It’s my birthday, and I want a present only you can give me” speech, Mary found herself with child. The pair ran away together--along with Jane--to Europe. Mary’s father and stepmother were beyond angry and grieved to lose both daughters to this immoral, practically penniless poet.

At first, life-on-the-run was exciting and thrilling for Mary. But soon having no money wasn’t quite as romantic. And being pregnant? Not so fun either. The book recounts their travels both in Europe and England as they look for the next-big-adventure or the next-big-burst of inspiration to come. 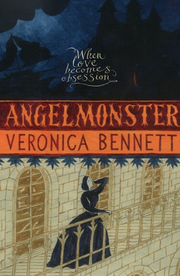 AngelMonster is a fictional account of Mary and Percy Shelley. While many facts within are true, a few have been rearranged to fit the author’s own liking. For example, Mary Shelley in actuality wrote Frankenstein in 1818. However, in AngelMonster, Bennett doesn’t have Shelley writing and publishing Frankenstein until after her husband’s death in 1822.

Overall, I really enjoyed this one. It was great. I am a big fan of Frankenstein. And I had studied Mary Shelley’s life quite in depth as a graduate student in a class on the Romantic Poets. A class that focused more on the biographies of Keats, Percy Shelley, Mary Shelley, and Lord Byron...than on their actual works. (Well, that’s not exactly fair, it was more fifty-fifty.)
Posted by Becky at 9:46 AM