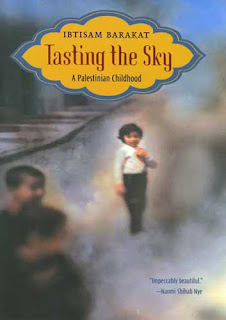 In this memoir, Ibtisam Barakat provides a framework for sharing her powerful and emotional story. The frame of the story is 1981. As a young woman, a teen, her bus is stopped by Israeli soldiers. The passengers are taken by the soldiers and interrogated before they are finally released to go to their destination: Ramallah.

From the very beginning, her narrative hooks the reader with its simple yet powerful style:

Birzeit is where students go to college after finishing high school in Ramallah. Some also come from Gaza, Nablus, and other cities, towns, and refugee camps. In Birzeit, many students become active in politics and have fights with the Israeli army. They chant on the streets that they want freedom from the occupation. But I did not go there to chant for freedom. I have my freedom. It is hidden in Post Office Box 34. This is what takes me from Ramallah to Birzeit.

Post Office 34 is the only place in the world that belongs to me. It belonged to my brother Basel first. He left Ramalllah and did not want to give up the box, so he passed it on to me. On the days I don’t go to Birzeit, I bury the key in the dirt under a lemon tree near our house. If I die, the key for the box will be under the ground with me.

Having this box is like having a country, the size of a tiny square, all to myself. I love to go there, dig the key out of my pocket, turn its neck around, open the door, then slowly let my hand nestle in and linger, even if the box is empty. I wish I could open my postbox every day. I feel that my hand, when deep inside it, reaches out to anyone on the other side of the world who wants to be my friend. (8-9)

My true journal is written with no pen or paper, but in my mind, with an invisible hand in the air. No one will ever find it (12)

She continues on by saying that her many pen pals world wide are always curious about her childhood. But that up until now, she’s lived by her mother’s motto that it is better to forget the past. To forget the atrocities. To forget the fear. To forget the nightmares. But our narrator is coming to a time and place in her life where she wants to remember...needs to remember.

And thus begins the second part of our story. This second part begins on the first day of the six-day war. As a young girl (maybe three year old), her world is turned completely upside down one day when their father brings home news of the war. After a few panicked hours in a water trench in their garden, the family decides to flee their home and join the throngs of rushing refugees that are trying to reach Jordan. The family rushes to their home, takes a few belongings, and the children are ordered to put on their shoes and be ready to go right then. But this poor little girl, she is unable to lace her shoes. And she could only find one.

Initially separated by her family by the rushing crowds, Ibtisam manages to find her family later that day among the crowds. Now no matter what happens, they’ll survive or die as a family all together.

The second part of the book covers the years 1967 to 1971. It covers the war, the year or so spent as a refugee in Jordan, their return to Ramallah and the rebuilding of their homes, the continuing fear of living in a “occupied” region, and the knowledge that set a young girl free: the power to read and write.

She then returns to the frame story, 1981, and shares how telling her story has been self-empowering. And how she is no longer afraid to share with others the traumas of her past.

Like a bird flinging
Its freedom songs
Across the sky

The small girl
I once was
Sings out this story.

I actually just finished reading this book and thought it was very well written. I especially liked how she didn't deal into politics, it was purely her memory as a child, which gives everyone a deeper understanding about what was really happening to the people at the time. Great job on writing the review!