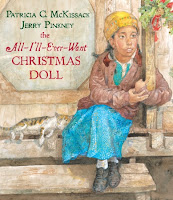 Christmas always came to our house, but Santy Claus only showed up once in a while.

It's the Depression. And Nella and her two sisters are wondering if Santy will make an appearance this year. Nella more than anything wants the beautiful Baby Betty doll she saw advertised in the paper. She imagined what it would be like to play with her. She talked about how she was the only thing she ever wanted...ever. I flat-out refused to give up my dream. So, without my sisters knowing it, I wrote Santy Claus a letter and sent it all the way to the North Pole. Will Nella get her wish? Will the Baby Betty doll be hers? And if she does get it...will she share with her sisters? Read and see. This one is too good to miss! 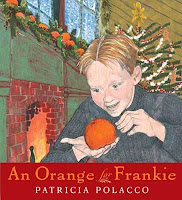 Author and illustrator, Patricia Polacco is known for her outstanding picture books. With endearing books such as THE KEEPING QUILT, MRS. KATZ AND TUSH, CHICKEN SUNDAY, PINK AND SAY, and THANK YOU, MR. FALKER to her credit, her readers expect the best, and AN ORANGE FOR FRANKIE will not disappoint. Drawing again from her family history, Polacco shares the story of one memorable Christmas centering the tale on Frankie, her great-uncle who died in childhood. As the story opens, the Stowell family is eagerly waiting for the return of their father and the gifts--nine oranges--he'll be bringing back for Christmas. Meanwhile, the family is preparing their home for Christmas and even caring for those in need as they give hot food and drink to the engineer and a group of hobos traveling through the local train station. Frankie, the youngest son, sees one man in particular whose need he can fill; he gives away his warmest--and best--sweater to an old hobo. The father soon returns with oranges for all--but the oranges must be saved for Christmas. He gives his children a warning not to even think about touching the oranges he places on the mantel with the greens. Frankie, however, can't resist just one touch. Then it's off to the pageant, where Frankie plays an archangel. It is only after the pageant that he realizes that the orange--which he stuffed into his sweater to conceal it when his mother came into the room--is gone. He then confesses all. He's soon forgiven and there are enough love and oranges to go around for everyone--each of his family gives him one section of their orange tied together into one orange with a ribbon. AN ORANGE FOR FRANKIE is a wonderful Christmas story that can be enjoyed by people of all ages.

This little gem of a book is only 90 pages long. It's been a favorite of mine for years, and I really can't recommend it highly enough. It is just one of the best Christmas books ever.

The Herdman's were absolutely the worst kids in the history of the world. They lied and stole and smoked cigars (even the girls) and talked dirty and hit little kids and cussed their teachers and took the name of the Lord in vain and set fire to Fred Shoemaker's old broken-down toolhouse. (1)

Meet the Herdman's: Ralph, Imogene, Leroy, Claude, Ollie and Gladys. They're described as "six stringy-haired kids all alike except for being different sizes and having different black-and-blue places where they had clonked each other." (4)

The first chapter we see what they're all about--the troubles they cause, the fear they create among their peers, etc. But chapter two is when it really gets exciting.

Here is where we learn that this won't be an ordinary pageant as we plainly see in chapter three at the casting. This year the Herdmans land all the big roles--through fear and intimidation, yes--but the roles are theirs just the same.

The first pageant rehearsal was usually about as much fun as a three-hour ride on the school bus, and just as noisy and crowded. This rehearsal, though, was different. Everybody shut up and settled down right away, for fear of missing something awful that the Herdmans might do. (43)

It soon becomes evident that this pageant will be one-of-a-kind, though no one quite expects it to turn out the way it does. Let the Herdmans surprise you this Christmas!

The Best Christmas Pageant is funny and charming and true-to-life. It makes a great read aloud too!