Today we begin our travels by reading Christmas In Scotland. This is one of the newer titles in the World Book series. A series that has turned out to be fascinating--most of the time--and more often than not good for a laugh while looking at some of the outdated pictures. There are a few things you need to know about Scotland. One is that for centuries, Christmas wasn't celebrated at all. Even stranger to fathom is that it wasn't made a national holiday until the 1970s. Scotland didn't begin out being Scrooge and all bah humbug. At one point in time, around the time of the Protestant Reformation and the resulting Puritan movement, Christmas was banned. No celebrations were allowed. The traditions apparently were too deeply rooted in either Roman Catholic ceremonies or even more ancient traditions--heathen traditions from Celts and Vikings and whatnot. So Christmas may have been banned, but that didn't stop the New Years' celebr 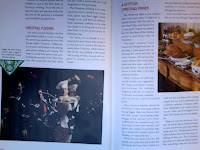 ations. Not at all. Hence Hogmonay. A very unique Scottish New Years' celebration. One that lasts a few days up to a whole week. So even though Christmas isn't illegal--far from it--it's not the main 'holiday' that gets people celebrating. Overall, I found the book interesting and enjoyable. One of the more amusing--to me--features is that it includes a recipe for Haggis. I know it's traditional and all...but a book geared for kids...that informs them exactly what the dish is..."the stomach of a sheep stuffed with its chopped lung, liver, and heart mixed with oatmeal and spices and then boiled." And then the reader learns that it is customarily served with turnips...I just don't think anyone would be jumping up and down at the chance to learn the recipe. Also not to be missed, Winter Solstice at Maes Howe. Watch through webcam November 25, 2007-5 February 2008.

Greece is completely different from the other countries we've looked at so far (Switzerland, France, Germany, Italy, Spain, Brazil, etc.). But different is part of what makes this one so fascinating. One of the things that is so strikingly different is the observance of the Christmas Lent. "Christmas Lent is a solemn 40 day period of fasting and reflection. It begins November 15 and continues until Christmas Eve. During this time, devout Greeks focus on preparing themselves spiritually for the arrival of the Christ Child. For the Greek Orthodox, this is not a time for parties or merrymaking. Instead, it is a time for fasting, confession, and deep reflection. People attend church services, make confessions, and take Communion as they prepare. The Christmas Lent fast is strictly observed. It requires abstinence from all meat, milk products, and other rich foods" (11). There is no public or private celebration before Christmas Day. With Christmas comes a feast. One of the most important parts of this feast is the baking and breaking of the Christmas bread, the Christopsomo. This isn't the only special bread of the season. New Year's Eve/New Year's Day sees the baking of Vasilopita, St. Basil bread. But I'm getting ahead of myself. Beginning Christmas Eve, children--traditionally boys--would carol--sing songs--going from house to house. They would be rewarded with treats--coins, or small treats of food--nuts, fruits, etc. This is called kalanda. They make three appearances during this time: Christmas Eve, New Year's Eve, and the Eve of Epiphany. One other thing you should know about celebrating Christmas the Greek Orthodox way is that the twelve days between Christmas and Epiphany are exciting ones--they are called the Dodecameron. It is during these twelve days that shopping, partying, and other 'festive' activities such as decorating occur. While it isn't unheard of for Greeks to have the traditional Christmas tree. Their own ancient traditions have them decorating boats. Why? Because St. Basil, the gift-bearer for children, comes by boat for one. St. Basil delivers presents during the night of the New Year's Eve. (There are no presents exchanged on Christmas day.) But even if families have a tree in their homes to decorate, it never appears before Christmas. And sometimes it doesn't appear until New Years Eve. Epiphany is another sacred celebration--this time of John's baptism of Jesus. So while Greeks may begin the season relatively late--when it comes to celebrating and feasting--their celebration and feast days continue into January--January 6th in some places, January 8th in others. Like the others in the series, this one includes crafts, recipes, and songs.
Posted by Becky at 9:26 AM