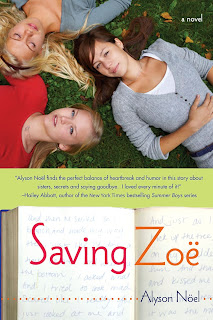 Echo is the narrator of Saving Zoe. She's gone from being the youngest to being the only child. The murder of her older sister, Zoe, has changed everything. It has not only changed the family dynamics, it's made a great impact on her emotionally and socially. She's used to the stares, used to the comments, used to the looks. She's the one. Can you believe her sister was murdered? Psychologically, the changes in Echo are HUGE. She's having to redefine who she is practically every day. For her birthday, her sister's former boyfriend gives her Zoe's diary. A diary left in his hands as a promise to return. A promise never kept. Echo reads, learns, understands, grasps. What is surprising to Echo is that the sister she thought she knew...she really didn't know. All these assumptions on her part...all those years...and there were so many things that Zoe wasn't ready, wasn't able to share with her baby sister. Echo reads about her sister's most personal, most private thoughts...and she finds herself drawn to the sister she never got a chance to know, the boyfriend she didn't have a clue about. Marc. The boyfriend. The former boyfriend. Somehow these two are drawn together in pain, in grief. Both needing closure, both needing comfort, both needing to talk, to share, to understand.

Saving Zoe is a good read. It's told through both Zoe and Echo. It's sad but not as depressing as some of the books I've been reading. But more importantly, Echo, Zoe, Marc, are characters that you can like. I'd definitely recommend this one.

They say there are five stages of grief:

Up until last year I didn't know there were lists like that. I had no idea people actually kept track of these things. But still, even if I had known, I never would've guessed that just a few days before my fourteenth birthday I'd be stuck in stage one. (1)

Labels: 2007, brothers and/or sisters, Death and Dying, YA Fiction, YA realistic fiction

Sounds like a good one. I like her name too. Is her name a play on words? Are there "echos" of her sister in her? I'll add this to my wishlist. Thanks for the review!

more like a play on words for zoe being that it means life in greek. but i read the book in two sessions i couldn't put it down. when you read this novel you can't help but think your somehow intertwined with this crazy fast-paced world echo is trying to cope with.

p.s. i am 13 but i still think someone much older can still relate!

this is the best book i have ever read i can relate to it so much and it does help and tell you exatly what your goin to go through during your teenage expeirence.

I am going to read this one. Just bought it at Barnes & Noble, can't wait!