What's not to love about a family of potato-lovin' pigs? It all starts with one hungry little piggy. A piggy that wants a potato. But what one piggy wants, another and another and another and yet another will soon want. Soon Mama piggy is cooking ten potatoes for nine hungry piggies! Luckily, these pigs know how to help Mama best and remember to say thank you at the end of the meal! This is a fun counting book (1-10) featuring a family of piggies and their piggy neighbors.

One pig wants potatoes
So Mamma starts to cook.
Then one pig's little brother
Decides to come and look.
Now Two pigs want potatoes
And soon begin to yelp
So Mamma scolds her two pigs
And tells them they must help.

If you have a child that loves piggies, this one is a real treat!!! 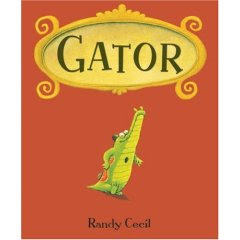 Gator was once the happiest carousel animal in the world. He loved the flashing lights, the sound of the calliope, and the feeling of wind on his face. But most of all, he loved the laughter. Gator is the story of a carousel animal that is saddened by the closing of the amusement park. His life is dull and he and his other carousel buddies are all forgotten. Gator decides to seek out a new life, a life where laughter can once again be found. His journey takes him to several places--the local duck pond, the zoo, etc. Will he ever find that joyous sound of children laughing? Is there a way to breathe new life into his old home? Read and see for yourself!

While I didn't love, love, love this one. I think it is a fun title. It was certainly enjoyable. My favorite part was when he realized that the animals were real--there were such things as real, live ducks. And to Gator's amazement they could fly!!! And of course he has to visit his real, live alligator counterparts. He finds them big and scary--unlike him in every way. So overall, I recommend this one! 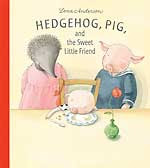 It's always interesting to read international books, especially picture books in translation. This one comes from Sweden. Hedgehog is apparently a recurring character, but this is the first I've seen of him. While I wouldn't say this one is a wonderfully, wonderfully outstanding book that you can't do without--I will say that it's a nice, pleasant, enjoyable read. Hedgehog is dining with her good friend Pig when they hear a knock on the door. Standing there alone and afraid is a young pig who is lost and wanting her Mama. The two take her in for the night. Give her a nice, hot meal. Give her a warm and cozy place to sleep. Both reassure her that the next day they'll set out to find her mama. And sure enough, the next day the three set off for town. Their noses lead them to the piggy's mother--a baker. And all is well and good again with the world and everyone enjoys a nice sweet roll. 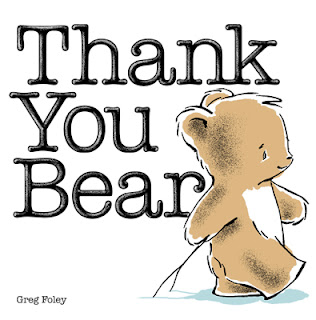 Sometimes I read a book and it's magic through and through. I just love everything about it. It just works. Such is the case with Thank You Bear by Greg Foley. It's simple. It's sweet. It's true. There is a purity about it almost. Bear, our hero, finds a little box. Something he exclaims "is the greatest thing ever!" He knows, he really knows that his friend Mouse would love this box. And so Bear begins his journey to give his friend a present. Along the way, he encounters many different animals--a monkey, an owl, a fox, an elephant, a squirrel, a bunny. Each one tells him that a box isn't that great, isn't that special, isn't much of a present, isn't much of anything really. Bear ponders this, and while he's pondering all those messages Mouse happens to find him. And guess what? Mouse sees the box and loves it. Mouse agrees with Bear that it is the greatest thing ever!!! And the book ends with a big, sincere "Thank you, Bear!!!" It says so much with so little text. I just love, love, loved it!!! 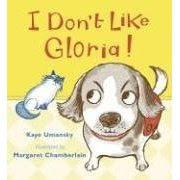 Umansky, Kaye. 2007. I Don't Like Gloria. Illustrated by Margaret Chamberlain.

This picture book is all about pet politics. Calvin, the dog, doesn't like the fact that his owners brought home a new pet. Gloria, the cat, has now become the center of attention. When Gloria 'provokes' Calvin--eating his food, sleeping on his bed, etc.--it is Calvin who gets in trouble. The two continue bickering until one day there's another unpleasant addition to the family--a rabbit named Jeffrey. This one is simple enough. And I liked it. I think it is plenty enjoyable. But after reading the magic that is Thank You, Bear...I'm not in love with it. For pet lovers, owners, (dog, cat, bird, rabbit, whatever) this will be a funny, true-to-life read about the adjustment period pets must go through when a new one is introduced. 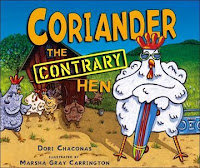 This is a fun book about a contrary hen. A hen that prides herself from being different from the crowd, of following her own rules, of doing whatever she wants as long as it's the complete opposite of what's expected, what's demanded, what's commanded. Coriander will be bossed by no one. Noticing that all the other hens had their nests in the henhouse, she decides to build her nest in the middle of the road. It just so happened that the driver of the pickup truck didn't choose to run over her. He chose to stop. Mind you, he wasn't happy about it. He was full of grumbles and complaints. So there you have it, a hen holding up the traffic on a country road. Any predictions???If you guessed that there would be a traffic jam and a lot of unhappy people...then you're good at this... Any guesses as to what happens next...well, I won't spoil it for you. But I'll tell you this much--it doesn't end up with the farming family eating fried chicken.

This one is one of my favorites of the entire year. It is so new. So fun. So unique. This is what the book says about itself: Imagine the best book ever. This is better. It's about my New Socks, and it's about me. Read it. You'll like it. Curious? Our little hero, our narrator, is presumably a chick with new socks. These new socks give confidence, give greatness, give inspiration. They are some mighty powerful socks, let me tell you. Hey New Socks...I'd like you to meet someone...Wood Floor! Whoa! Isn't that just too cute, too funny??? And Watch me not be scared on the big-kids slide! In New Socks! Good job, brave New Socks, good job! I love the text; I love the illustrations. This one is truly a must-read.
Posted by Becky at 5:46 PM

I love Coriander and New Socks, and I'm looking forward to reading the rest! Thanks for posting! :D