Christmases in Switzerland are known for their diversity. With three official languages--German, French, Italian, and two religions (not official) Protestant and Roman Catholic, expect every region, every village or city, to be different. The book states early on that "no single 'Swiss' Christmas tradition exists. The people of each region celebrate the season in their own way. In fact, people in one region may be completely unaware of customs observed elsewhere."And a few pages later that "knowing that someone is Swiss does not necessarily reveal a lot about how he or she spends the winter holidays." The book examines how Italian, French, and German traditions have influenced the Swiss regions. What I enjoyed with this one is the focus on cheese and chocolate. (Not that they made that a focal point. But it's what I was searching out in the text.) There do appear to be several things that are unique, however. Brunnensingen is a Christmas Eve remembrance of the plague of 1348. And the Nunichlingler, a bell ringing procession of some sort with some unusual behavior involving a sooty rag. Again, this one is a fascinating read full of I-didn't-know-that facts. Crafts, songs, and recipes are included. 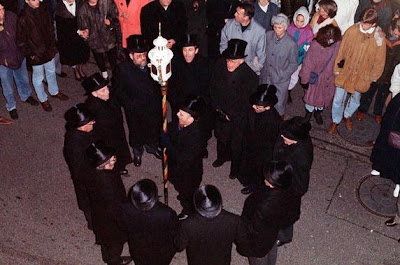 This one is another gem. It is well organized, well written, and overall quite fascinating. I learned many things through reading it. I'll try to recap just a few. First, like in France and Spain, each region, each city, town, or village, can have their own style or way of doing things. So there is no "one" way to have Christmas. Each book just tries to capture a handful of ways Christmas is celebrated. That being said, I learned that presents come on many different days. Not every family would participate in all days by any means, but here are few of the 'big' days: December 6th, Saint Nicolas' feast day in the region of Bari and the Adriatic coast; December 13th, Santa Lucia in Sicily; December 24/25, some will see a visit from Santa Claus--Italy being influenced by the American G.I.'s in World War II for one thing though the change probably would have come anyway; January 1, some regions exchange gifts going back to Ancient Rome's traditions of a yule log, a ceppo; January 6th, Epiphany is the official end of the holiday season. Who brings the gifts in Italy? While Santa Claus may be an infiltrator of late, the original Italian gift-bearer is an old witch named La Befana. [Note to self: look for Tomie dePaola's The Legend of Old Befana, a picture book]. This is a story that I found fascinating, and I hope that you will too. In addition, the book offers descriptions of food, art, music, shopping, religious ceremonies, history and folklore, and much much more. It even includes a recipe for cannoli (one of my favorite treats!).
Posted by Becky at 8:05 AM