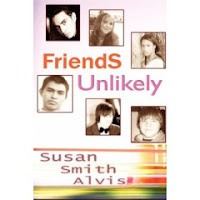 Emotionally draining but authentic never-the-less, Friends Unlikely is the tale of five friends struggling with some of life's hardest issues: drug addiction and HIV/AIDS. Carlos, one of our heroes, is a young teen addicted to drugs--specifically Meth. He's on a path for self-destruction that not even the beautiful and kind Davina can block. Raj, another of our heroes, is a young teen guy who rather dramatically discovers that he is HIV positive. Shocked that his one-night-stand could take years off his life, he never-the-less manages to respond with courage and a certain dignity that the reader can't help but admire. When the truth about how he was infected is revealed, it makes this story even more heart-wrenching. Abbie and Juan complete the five in the circle of friendship. Abbie is our narrator. She, like Davina, is compassionate and loyal. What's not to like about a heroine that sees the good in everyone? Who can face the darkest of days without giving into dismal despair? Who has the courage to support her friends with their life and death struggles?

These five friends will face some of life's hardest battles, but they'll do it together. Life isn't fair. Life isn't pretty. It's full of mistakes, heart aches, bad decisions, regrets. But because these friends have each other, they'll never give up on life.

Friends Unlikely isn't an easy read for sensitive folks who prefer neat, tidy happily-ever-after endings. But if you're looking for a good, strong dose of reality, then Friends Unlikely is where you'll find plenty to nourish you.

It isn't a perfect novel by any means, but what it lacks in subtlety (a bit too melodramatic in times, and heavy doses of foreshadowing) it doesn't lack in heart. You never forget that this is an issues novel--that the emphasis is always on the issues of drugs, HIV/AIDS, etc. (Think of it as a cousin to a didactic after-school special only once or twice removed.) But the characters aren't completely flat and lifeless either. Abbie and Raj especially are fleshed out. (Even if they did just start out as stereotypes.) While the problem of drug abuse and AIDs is a very real epidemic, and the situations facing real people--teens and adults--are genuine concerns we should all have to a certain extent. I can't help but wishing that the message wasn't running the show completely.
Posted by Becky at 5:53 PM

Labels: 2007, YA Fiction, YA realistic fiction