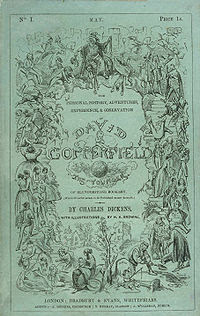 Whether I shall turn out to be the hero of my own life, or whether that station will be held by anybody else, these pages must show.

I wasn't always a fan of Charles Dickens. I wasn't always fond of his writing style--his descriptions, his quirky characters. (Then again, the first few experiences were with the same book--Great Expectations.)  But that began to change last fall when I read Bleak House. And since my re-introduction to him--as an adult--I've since come to LOVE him, really, really love him.

How did I feel about David Copperfield? Well....I definitely liked the novel. I did. There were times I loved it. There were times I didn't love it quite so much. I must admit that there were times I felt David Copperfield (the character) was just STUPID. I mean, completely oblivious and not in touch with reality. Like he was incapable of processing the whole truth even when it was right in front of him. But then there were other times when I actually began to like him. And even when I wasn't exactly "liking" him, the novel was still an interesting read. I wasn't bored. I wasn't tempted to give it up. There were too many characters that I cared about, too many stories that had me hooked.

The (human) character I liked least, and I'm not sure if this was Dicken's intent, was probably Dora. And the chapters where David was smitten (to put it nicely) with her and courting her were probably the most painful to read. Simply because Dora seemed so very, very silly and ridiculous. Should I have more sympathy for her than I do? Should I see past her silly vainness, her selfishness, her childishness?


One thing troubled me much, after we had fallen into this quiet train. It was, that Dora seemed by one consent to be regarded like a pretty toy or plaything. My aunt, with whom she gradually became familiar, always called her Little Blossom; and the pleasure of Miss Lavinia's life was to wait upon her, curl her hair, make ornaments for her, and treat her like a pet child. It was very odd to me; but they all seemed to treat Dora, in her degree, much as Dora treated Jip in his.
I made up my mind to speak to Dora about this; and one day whereon we were out walking (for we were licensed by Miss Lavinia, after a while, to go out walking by ourselves), I said to her that I wished she could get them to behave towards her differently.
'Because, you know, my darling,' I remonstrated, 'you are not a child.'
'There!' said Dora. 'Now you're going to be cross!'
'Cross, my love?'
'I am sure they're very kind to me,' said Dora, 'and I am very happy.'
'Well! But, my dearest life' said I, 'You might be very happy, and yet treated rationally.' (604)

I did NOT care for Jip, by the way.

There was another thing I could have wished; namely, that Jip had never been encouraged to walk about the table-cloth during dinner. I began to think there was something disorderly in his being there at all, even if he had not been in the habit of putting his foot in the salt or the melted butter. (641)

Anyway, David Copperfield is a long novel, but it is a deliciously long novel. I happen to like it more than Little Dorrit but less than Our Mutual Friend. I'm definitely glad I read it. I definitely enjoyed meeting some of these characters.

More of my favorite quotes:

'Gentlemen,' returned Mr. Micawber, 'do with me as you will! I am a straw upon the surface of the deep, and am tossed in all directions by the elephants--I beg your pardon; I should have said elements.' (708)

'Things are changed in this office, Miss Trotwood, since I was an umble clerk, and held your pony; ain't they?' said Uriah, with his sickliest smile. 'But I am not changed, Miss Trotwood.' "Well, sir,' returned my aunt, 'to tell you the truth, I think you are pretty constant to the promise of your youth if that's any satisfaction to you.' (746)

I have often remarked--I suppose everyone has--that one's going away from a familiar place, would seem to be the signal for change in it. (820)

Like you my first introduction to Charles Dickens was Great Expectations when I was younger. I have avoided him ever since.

It's nice to know that as an adult you have come to appreciate him. That means there is hope for me.

One of these days I am going to get around to this book. I have enjoyed other books by Dickens, but I don't exactly rush out and read him generally..

I read this one last year and I really loved it. I agree, Dickens can write some amazing characters!

This book is on my TBR list. I have never been a fan of Dickens because I read "Great Expectations" in a literature class in highschool and *greatly* disliked it.
I just recently read "Oliver Twist" and that has started changing my opinion of Dickens. I have a copy of "David Copperfield" but have not yet made it very far in the book.

I have learned to love Dickens too, but have only read a handful of his books. Thanks for reviewing this one.

Poor little Dora. She kind of had to die young because had she lived to be fifty or sixty, she would have been really insufferable.

I read this back in high school and I really need to revisit it. I have the most recent BBC production on DVD to watch with my daughter tonight (she is a budding booknerd).

I agree, Dora is a very annoying character. I just wanted to shake David Copperfield and say, take a look at Agnes - she is so much more your type!

That being said, I adored this book when I read it. I love Dickens characters and the life (good and bad) that he puts into them on his broad canvas.

Hi, I came across your review from the Victorian Reading Challenge page and clicked on it as I am nearly finished with David Copperfield myself at the moment - I have about 1/10 of the book left!
I agree with you so much about Dora - she really does irritate me! I feel bad but can't help it!
Anyway, was very interesting to hear what you thought and I can't wait to finish :)
Adam