Babylon 5: In the Beginning 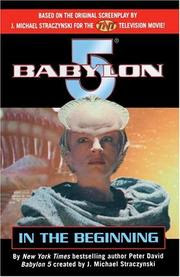 Can you guess who narrates this one? Can you recognize who's speaking? Hint: It's someone with a very distinctive voice. Once you know it, you won't forget it.

It may not be a fair question--not if you've seen the movie. But just a few sentences in and I knew it was my not-so-lovable 'old friend' Londo Mollari. He is just one of the reasons why Babylon 5 is so great. If a show makes you care--really truly deeply care about a despicable person, a person with few redeeming qualities--then that is good writing, good storytelling.

The framework of this one is perhaps a little odd. Emperor Mollari--for as the prologue says, he has achieved that dream at least, for what it's worth--is approaching the end of his life. He feels the end drawing near and he's turned reflective. When two children (two young people, a brother and a sister) interrupt him, well, he turns it into an opportunity to let down his guard, to relax. Luc, the brother, wants Londo to tell a story 'about great battles, wars, and bravery, and heroes and villains.' Lyssa, the sister, adds that she wants a 'true story.'  So Londo decides to tell these two children the story of the Earth-Minbari war. The great war between Humans and Minbari. (This is the war set around a decade before the start of season one. This is the war that gives Jeffrey Sinclair nightmares. This is the war that changes John Sheridan and gives him quite a nickname.)

Read In The Beginning
The movie released after season four. So there are elements in the book that might spoil shows from those seasons. Obviously if you've seen those four seasons, not much of anything could be spoiled. The episodes you might want to revisit before reading this one are parts one and two of War Without End from season three. And the episode "And the Sky Full of Stars" from season one.

I loved reading this. And I've got quotes to share!!! Can you guess that I loved Londo as a narrator?!

"The center of the Humans' government is in a place called Earthdome, which is in a place called Geneva, Switzerland. Switzerland is an interesting country on Earth, noted for--not necessarily in order of importance--neutrality, chocolate, curious timepieces, and cheese. I am not entirely certain which of these traits prompted them to locate Earthdome there, although if I had to bet on any one, it would most likely be the cheese." (19)

"When one is faced with a difficult situation, it is always wisest to provide a period of silence before attempting an answer. This will buy you time to come up with the least inflammatory response, and make you appear to others as if you are very wise, your opinions worth waiting for." (25)


"They were an unknowable people. They inhaled secrets and exhaled intrigue." (25)


"Ignorance, you see, can be outhought. Arrogance can be outmaneuvered. But ignorance and arrogance combined are unassailable." (27)

"If one pauses while one speaks, for the purpose of reconfiguring one's thoughts, then one looks hesitant or uncertain. However to pause before one speaks is to appear thoughtful and considerate." (54)

"Nothing breeds more rapidly than ignorance." (186)

I can't believe this came out in 1998 and I just found out about it! Oh, how I used to love staying up to watch Babylon 5 after Saturday Night Live. Count me as another Londo fan.

Londo is my favorite B5 character, he's a horrible person, but sometimes he tries to do good, maybe to make up for all the awful he knows he's been personally responsible for. I'm thrilled you've been reviewing all this B5 stuff!

This sounds awesome! I hope I can still track down a copy.

Londo is very distinctive character and also one of my favorites. Then again, I liked a lot most of the main cast: Ivanova, Delenn, Garibaldi, Sheridan, Sinclar. Even Bester had his awful/awesome moments. (Awful for characters around him, awesome for drama and storytelling.)