The Sunday Salon: Watching In the Beginning 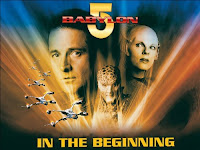 But before I do, I want to ask you a question. How do you feel about prequels? That is, how do you feel about prequels written/filmed years after the start of a series? Should they be watched chronologically--placing In The Beginning before The Gathering, before season one--or should they be watched after the first four seasons? (Since the movie aired just weeks before the start of season five). Star Wars, of course, comes to mind here as well. Should you start watching with Episode IV or Episode I?

I wanted to watch In the Beginning after viewing "War Without End". If you've seen War Without End--a two-part episode from season three which sees the ever-brief return of Jeffrey Sinclair--then you probably know why I felt it fit there beautifully. For within that episode, viewers see a forward-time-flash. We see Londo, as Emperor, seventeen years in the future. And it is this older-but-not-particularly-wiser Londo Mollari that narrates In the Beginning. Londo is telling the story of the Earth-Minbari war to two children who interrupt him on a very bad day, it is this that provides the framework for the story. But MOST of the story takes place in the past. A little over a decade before the opening of the Babylon 5 station, before the events of The Gathering.

I loved this movie. I did. I just loved it. I think one of my favorite things was seeing a young(er) Londo as an ambassador to Earth. We've had glimpses--throughout the show--of what Delenn did during the war, of what Sinclair did during the war, of what Sheridan did during the war, and I remember hearing Susan talk about losing her brother in the war, and we knew that Dr. Franklin was put in a difficult position during the war--about his medical research, his notes, but this was the first time--at least that I recall--that we learn what Londo (and G'Kar) were doing. So that was nice to learn something new. And it was nice to SEE it all come together. Not just as conversations, not just as flashes or nightmares. But to see everything all together.

The movie had some great scenes! It did. And I think, overall, it was very well done.

The prologue to In The Beginning:

Londo speaking admirably about the humans fighting the war:

The president's battle of the line speech:

Earth Force Lexington Vs. Minbari Black Star (How Sheridan got his nickname!)

One of the BEST videos ever that covers In The Beginning AND the first four seasons of B5.