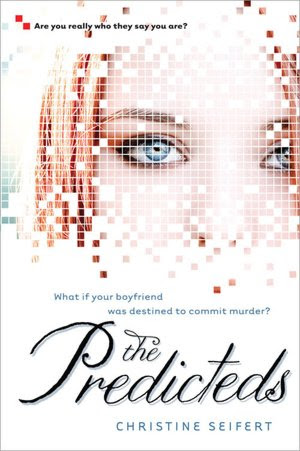 From the prologue: The rose-patterned carpet of the room reminds me of the guest room in my grandmother's house. When I was a kid there, I used to hop from petal to petal. If I landed on white space or a leaf, I had to start over again.

Even though I found this one a bit predictable, it was such an entertaining read, I didn't mind that I guessed who the 'bad guy' was so early on.

Daphne Wright, our heroine, has recently moved with her mother to Quiet, Oklahoma. What she doesn't know--at the beginning--is that Quiet is a test town for Profile, a project that her mother worked on and developed for several years. Her mother didn't like the direction the project was taking, and left it behind her. Or so it seems. But after a school shooting--the only fatality being the shooter, the rest were just injuries--things begin to change. Officials at the school decide to release the results of Profile--the names of individuals that certain tests have "shown" to be future offenders. These fall generally into two categories: potentially violent (rape, murder, etc.) and self-destructive (teen pregnancies, drug addictions, alcoholism, gambling addictions, etc.) Many "believe" that if Profile has predicted such a fate--then your failure is just a matter of time. You may not be a criminal today, but next year? five years from now? ten years from now? It's all a matter of time. As you might have guessed, once these results are made public, NO ONE wants to be near a Predicted. And the adults agree deciding that it just isn't right that Predicteds share a classroom with everyone else. They shouldn't even be in the same building. All contact between the two groups should stop. These people are designated too dangerous to know.

So. Our heroine, Daphne, has some issues with what is going on because her love interest, Jesse, turns out being one of those on the list. Her so-called "friends" urge her to dump him immediately. (Don't get me started on her "friends.") And she does let doubt stop her from using common sense there for a couple of chapters, but in the end when everything is-oh-so-obvious she regrets that she missed her chance with him and asks him to forgive her and give her another chance.

I liked this one. I did. I may not love it. But I thought it was an interesting read on an interesting topic: profiling, segregation, and discrimination. If future crimes could be "predicted" at an early age--between fourteen or eighteen, for example--would that effect how they are treated by people--not just their peers, but by everyone? Is knowing the result of a test validation to judge someone for something they haven't done...at least not yet? And wouldn't telling someone that they were going to grow up to be a certain way be a dangerous self-fulfilling prophecy? So it was a thoughtful dystopia novel with a school setting.