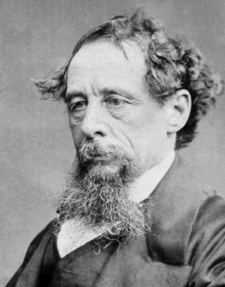 Fig and Thistle is celebrating Charles Dickens this January. And since it isn't possible to have a review each Tuesday in January--his works being usually long....long and wonderful!!!  (Last week I reviewed David Copperfield.) I thought I would celebrate some of Dicken's first lines. Can you identify which books these first lines come from?!

1. In these times of ours, though concerning the exact year there is no need to be precise, a boat of dirty and disreputable appearance, with two figures in it, floated on the Thames, between Southwark bridge which is of iron, and London Bridge which is of stone, as an autumn evening was closing in.

2. Everybody said so. Far be it from me to assert that what everybody says must be true.

3. Thirty years ago, Marseilles lay burning in the sun, one day.

4. My father's family name being Pirrip, and my Christian name Philip, my infant tongue could make of both names nothing longer or more explicit than Pip.

6.  The first ray of light which illumines the gloom, and converts into a dazzling brilliancy that obscurity in which the earlier history of the public career of the immortal Pickwick would appear to be involved, is derived from the perusal of the following entry in the Transactions of the Pickwick Club, which the editor of these papers feels the highest pleasure in laying before his readers, as a proof of the careful attention, indefatigable assiduity, and nice discrimination, with which his search among the multifarious documents confided to him has been conducted.

7.  Among other public buildings in a certain town, which for many reasons it will be prudent to refrain from mentioning, and to which I will assign no fictitious name, there is one anciently common to most towns, great or small: to wit, a workhouse; and in this workhouse was born; on a day and date which I need not trouble myself to repeat, inasmuch as it can be of no possible consequence to the reader, in this stage of the business at all events; the item of mortality whose name is prefixed to the head of this chapter.

9. Night is generally my time for walking.

11. Here are not many people - and as it is desirable that a story- teller and a story-reader should establish a mutual understanding as soon as possible, I beg it to be noticed that I confine this observation neither to young people nor to little people, but extend it to all conditions of people: little and big, young and old: yet growing up, or already growing down again--there are not, I say, many people who would care to sleep in a church.

12. NOW, what I want is, Facts. Teach these boys and girls nothing but Facts. Facts alone are wanted in life.

13.  Whether I shall turn out to be the hero of my own life, or whether that station will be held by anybody else, these pages must show.

You may have noticed I didn't include A Christmas Carol! While some of these are famous--very famous--I felt that one was just a little too easy. What's you favorite first line? Which one do you feel is best for 'hooking' the reader? Or capturing the readers' interest?

And for your entertainment....

excellent post, Becky! I really enjoyed the matching game and the video :) I am so glad to find another Dickens lover out there, people who love and read the classics seem to get fewer and fewer... hugs.