The Sunday Salon: Watching The Gathering 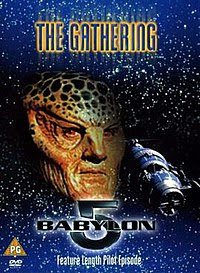 This week I watched The Gathering, the pilot movie for the television show Babylon 5. I had seen this one online last year--when the WB had it on their site. (But it was not the new-and-improved edition with better music.) If you're interested in watching the show online, you might check the WB site. Sometimes they have episodes online, sometimes they don't.

It is a pilot. That's important to keep in mind because the characters don't look quite themselves. The alien characters specifically don't look how they came to look during the show's seasons. The pilot also does not have all the regular cast. Susan Ivanova, for example, is not there. There is also another doctor (Dr. Kyle instead of Dr. Franklin) and another telepath (Lyta Alexander instead of Talia Winters).

The Gathering begins with narration by Londo Mollari--the Centauri ambassador to Babylon 5.


"I was there, at the dawn of the Third Age of Mankind. It began in the Earth year 2257 with the founding of the last of the Babylon stations, located deep in neutral space. It was a port of call for refugees, smugglers, businessmen, diplomats and travelers from a hundred worlds. It could be a dangerous place, but we accepted the risk because Babylon 5 was our last, best hope for peace. Under the leadership of its final commander, Babylon 5 was a dream given form, a dream of a galaxy without war, when species from different worlds could live side-by-side in mutual respect, a dream that was endangered as never before by the arrival of one man on a mission of destruction. Babylon 5 was the last of the Babylon stations. This is its story."

The basics: The ever-mysterious Vorlon ambassador, Kosh, is arriving at Babylon 5. (All Vorlons are ever-mysterious, not just Kosh). No one has ever seen a Vorlon. No one. And as Sinclair jokingly says, his government has a big-- but empty--file on the Vorlons. There are a handful of people arranged to meet him at his arrival. But minutes after his arrival, Kosh becomes ill. He could very well be dying. And the Vorlons would rather him die than for the humans to get a look at him without his encounter suit on. So what's the good doctor and the good captain to do?! It quickly becomes obvious that someone wants Kosh dead, but who?! Garibaldi, the chief of security, has quite a challenge before him.

Watch The Gathering:
Watch Jeffrey Sinclair talk about the Earth-Minbari war and the Battle of the Line.

Do you have a favorite science fiction show?

Here's a little video that might just inspire you to give B5 a try...

I rewatched Babylon 5 last year and it was still as good as ever. The pilot isn't my favorite but it has great moments.

My favorite SF shows? I have lots of them: Farscape, B5, the new Galactica, Star Trek: DS9 and TNG, Termiantor: the Sarah Connor Chronicles, etc. B5 is definitely the best for cohesive storytelling and one of the best for great characters.