All Our Worldly Goods 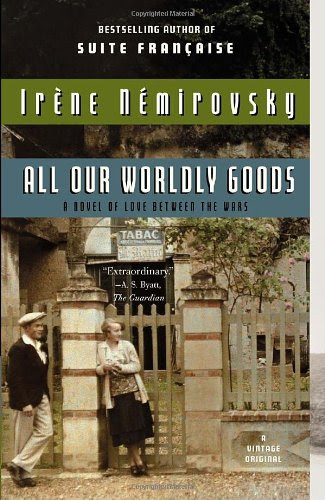 They were together, so they were happy.

What All Our Worldly Goods lacks in characterization, it more than makes up for in beautiful writing. Nemirovsky's novel has great atmosphere: a rich, detailed setting. The characters are more simple than complex human beings, but, I think there are enough presented to get a flavor of what life was like across the generations in the troubled decades between the start of World War I and the beginning of World War II. They're more sketched than developed.

The novel begins with the love story of Agnes and Pierre. These two aren't exactly from the same class. And his mother has arranged his marriage with someone else, a young, rich woman named Simone. But Pierre and Agnes are deeply in love, and Pierre chooses to go against his family's wishes and marry for love not money.

A few years later--after their new family has grown to include a baby boy, Guy--war is declared. Pierre becomes a soldier, and Agnes along with his family must learn to deal with the new reality. The first third of the novel, at least, deals with the first world war. We get to see the war from multiple viewpoints. There were many great scenes--including scenes from Pierre's parents' perspectives--about the war. Pierre does survive the war. Though like many soldiers, many people touched by the war, he's not quite the same innocent as before.

The rest of the novel takes us from the end of the first world war through the beginning of the second world war. When the novel ends, part of France is occupied. These chapters are sketches. Good sketches, for the most part, of how families change, villages change, how life goes on. Readers see Pierre and Agnes' children all grown up. (They also have a daughter, Colette). Part of the novel focuses on the late 1930s and captures the uncertainty of it all. Will there be another war? Can peace be maintained? Can diplomacy stop a war before it begins? Is the war inevitable?

Pierre may be too old to go to war a second time, but his son, Guy, is not. And war once again is changing everything.

It was the very beginning of the war, when the heart bleeds for everyone who dies, when tears are shed for each man sent to fight. Sadly as time goes on, people get used to it all. They think only of one soldier, theirs. But at the start of a war the heart is still tender; it hasn't hardened yet. (55)

The other one...the other war...People said these words in a stunned tone of voice: it was a new phrase. Another war...Twice in one lifetime, it was too much. But everyone was bowed beneath the same destiny, and courage was born out of their communal ordeal. (202)

The war was already trying to create its own legend. It was understood that the women had to prove themselves worthy of the soldiers through their calmness, their courage, their blind confidence that fate would smile on them. For Agnes it was easier; she had played the role before. For four years she had lowered her head, waited, fought back her tears in silence, smiled at young and old; she had hoped. But for the younger women it was all much harder. Stubborn, anxious, passionate, they had believed until now that it was easy to control their destiny. (206)

The author's story is interesting--though tragic. Irene Nemirovsky was a French novelist of Russian and Jewish heritage who did not survive Auschwitz. I cannot imagine writing this novel at such a time. Can you?


Read All Our Worldly Goods
This was the second book I read for the War Through the Generations reading challenge.

I really want to read Nemirovsky. I have a book by her on my TBR pile...

I’m a writer, book lover, and your newest blog follower! My blog is Life of Lois Feel free to stop on by.

Thanks for the review. We've got it linked on the book reviews page.

I love Nemirovsky, and this book is no exception. She was such a lovely writer - I agree 100% with you about her writing being beautiful. If you haven't read her other books yet, you should.