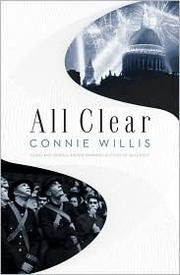 By noon Michael and Merope still hadn't returned from Stepney, and Polly was beginning to get really worried. Stepney was less than an hour away by train. There was no way it could take Merope and Michael--correction, Eileen and Mike; she had to remember to call them by their cover names--no way it could take them six hours to go fetch Eileen's belongings from Mrs. Willett's and come back to Oxford Street.

All Clear is the sequel to Connie Willis' Blackout. And as I mentioned yesterday, you are going to want to read these two books as if they were one. (There's a good reason these two books were the combined winner for the 2011 Hugo Awards. And the Nebula Awards. Doomsday Book also won both the Hugo and Nebula. To Say Nothing of the Dog just won the Hugo Award. I think it says quite a lot that each of Connie Willis' time travel books has won an award!!!)

So how much is it safe to say in a review of All Clear? Since even talking about the first few chapters of All Clear will spoil the drama of Blackout?! I was thinking about that yesterday as I wrote the review. Would that one review 'do' for both books? What more would I say about the second book? And essentially the only thing I thought of was that All Clear was even better, even more intense. If Blackout was dramatic and exciting, then All Clear is unbelievably dramatic and incredibly fast-paced. Almost dangerously so. In that, I was so WORRIED about the characters, about what was going to happen next, about what it all meant, about where it was all going, that I RUSHED, RUSHED, RUSHED through the chapters. I read a 645 page novel in one day. (Not to mention that it was the same day I finished Blackout.)

Together Blackout and All Clear were an amazing, amazing read. Just incredible. The characterization is great. There were just SO MANY characters I loved. The premise is interesting. And the intensity, the pace, the drama of it, well, few books can match it.

For those that may not have seen my review of Blackout, let me just keep it simple. Three historians (time travelers) have gone back in time to 1940. Each historian is researching or observing something different. Different locations--in England. Different months in 1940. But when SOMETHING happens that 'traps' them in that time period, well, they have to learn how to really live in that time period. Their research stops being research, and it becomes all about surviving.

One day I will really need to get to these books.

Couldn't agree more, Becky. These books are two of the most compelling I've read in my entire life!

So, my review today is of The Hunger Games, which I finally read. Do stop by and leave a comment!

Cindy at Notes in the Key of Life

I really liked a lot of this book (these books :D) but overall I just didn't love it. I thought there was just too much repetition and talking around the point. Loved all the war details thought.

Becky, now you have me making a list of all the Connie Willis books and in which order to read them. Thanks again for posting to the Time Travel Challenge page.