My hat is gone. I want it back.

I'll start by talking about my favorite of these three 'odd' books. Jon Klassen's I Want My Hat Back. In this quirky but delightful picture book, children are introduced to a bear who has lost his red, pointy hat. The bear is going from animal to animal asking everyone if they've seen his hat. It takes him a little while to find the culprit--perhaps readers will spot the culprit first!!!--but his hat will be found. Was justice served?! You be the judge.

Probably my favorite scene in this one is when Bear 'interrogates' the rabbit...and walks away. The text and illustrations show that the rabbit is obviously lying. But Bear isn't exactly observant.

Bear: Have you seen my hat?
Rabbit: No. Why are you asking me.
I haven't seen it.
I haven't seen any hats anywhere.
I would not steal a hat.
Don't ask me any more questions.
Bear: OK. Thank you anyway.

Have you read this one? What did you think?! Here is the book trailer for it... 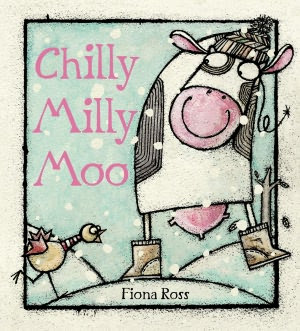 Milly Moo isn't like the other cows on the farmer's farm. No, Milly Moo does NOT like the heat. In fact, she is unable to make milk because the weather is so disagreeable to her. But when the weather changes, the farmer sees that his other cows are now miserable...Milly Moo is deliriously happy...but will she be able to make milk?! Maybe, maybe not. Maybe she'll produce something colder, richer, creamier than milk. To the farmer's and reader's great dismay. (I personally had a hard time believing it...but...each reader will have to decide for themselves what to make of Milly Moo and her talent.)

This one I felt was a bit different, a bit odd, a bit out there. Not horribly so. Not unforgivably so. Just not your usual, typical picture book about cows and farmers. 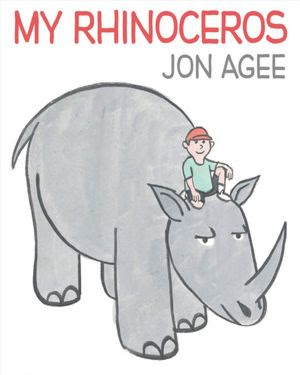 When I bought my rhinoceros, I didn't really know what I was getting into. He was a nice animal. Quiet, shy. He stayed in the yard. Kept to himself. After a couple of days, I noticed that my rhinoceros wouldn't chase a ball. Or a stick. Or a frisbee. He didn't roll over. He didn't do anything. I called a rhinoceros expert...

For those looking for picture books about unusual pets, exotic pets--and there are many, many picture books out there in this category--this one will be a treat. The little boy that stars in Jon Agee's My Rhinoceros has quite the pet. Even if he doesn't know everything his new pet can do...just yet.

The book is very, very silly. And I haven't quite decided what I think of it yet. Have you read it? What did you think?!

I love the idea of a pet rhinoceros! What a great way to fascinate children and get them excited about reading - if just to learn fun pets their parents will never let them have!