To Dream in the City of Sorrows 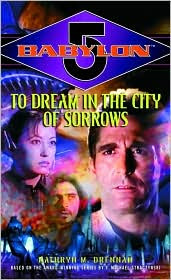 From the prologue: Marcus Cole walked with a limp, a fact that did not go unnoticed by the young Minbari acolyte as Marcus entered the small temple. Marcus didn't recognize the rather chubby Minbari and briefly wondered where Sech Turval was, but as he was not in the mood for conversation, he simply made a note to seek out the venerable Minbari teacher at a later time.

I am so glad I decided to reread To Dream in the City of Sorrows! I first read this one last summer, last June. And the timing happened to be perfect for me. What I was reading went so perfectly well with what I was watching. The episodes I'd just seen meant just that much more because of the reading, and the episodes were influencing how I read the novel.

There were things I appreciated *even* more the second time around. Things that meant more since I knew how the story ended.

So the framework of To Dream In The City of Sorrows--the prologue and epilogue--take place shortly after season three's "Grey 17 is Missing," and are narrated by Marcus Cole. (I just LOVE, LOVE, LOVE Marcus Cole!) But most of the book focuses on what was happening with Jeffrey Sinclair after he left Babylon 5. (The gap between the last episode of season one, "Chrysalis," and the incredibly intense two-part episode "War Without End" of season three. Those two episodes are so-very-important and oh-so-dramatic!!!)

IN the first episode of season two, viewers learn that Jeffrey Sinclair has been suddenly removed from his position on Babylon 5 and reassigned to Minbar. Officially he is the "ambassador from Earth" on Minbar. The FIRST human ambassador to Minbar. Unofficially, well, he's out of favor with Earth Alliance. But that may just prove to everyone's advantage.

In the introduction, J. Michael Straczynski writes, "What you hold in your hand is an official, authorized chapter in the Babylon 5 story line. This is the definitive answer to the Sinclair question, and should be considered as authentic as any episode in the regular series."

Read To Dream in the City of Sorrows