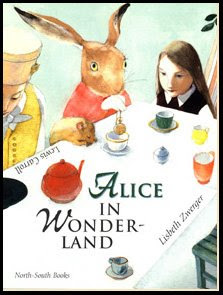 (This edition is the one published in 1999 featuring the illustrations of Lisbeth Zwerger.)

If you're like Alice (when it comes to books), then you'll be pleased to know that Alice in Wonderland has plenty of pictures and conversations to offer readers of all ages. How to describe it? Magically wonderful? Practically perfect in every way? I think I'll go the chattier route, though.

My mom read Alice in Wonderland to us (me and my sister, my older sister) at least once or twice growing up. It was one of those books that was magical. Proof that reading was magic, that reading was the best way to spend an afternoon or evening. She had multiple copies, and we'd all three "read" along together. Of course, mom and my sister could read. I wasn't quite old enough to read it on my own, but oh-how-I-loved-to-pretend. But whether remembering the first time or the next dozen times, one thing was always the same. It was magic to go along on these adventures with Alice.

The story for those that may not be familiar with all the particulars begins when Alice follows a white rabbit down a rabbit hole. She spends some time falling down, down, down, down. But eventually she does reach the bottom. What she finds is an ever-changing, quite-strange world that both puzzles and delights and even at times frights. This strange place, this wonderland, has its own strange set of rules, its own logic, something that Alice can't quite wrap her mind around. (Not that I'd do any better, mind you!) Like her surroundings, she finds herself changing in unpredictable ways as well. Everything is fluid. Just when she starts to make sense of her situation, something changes, something transforms. Wonderland can be portrayed as dark or as light as you imagine. Especially when it comes to film and other adaptations.

The unique characters, the unique settings, the unique logic. All three make Alice's Adventures in Wonderland ever-so-magical and always-memorable. 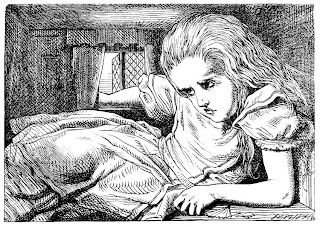 Alice's Wonderland is strange. No doubt about it. But it has always made sense in a strange sort of way to me. It was like Lewis Carroll was a genius in capturing in conveying the dream world. Haven't you had dreams as strange as this one? Haven't you in-the-moment-of-the-dream gotten caught up in the new reality? Dreams have their own logic and so does Wonderland. And the more of a dreamer you are, I suppose, the more you love Alice and her 'friends.'

Though I read the Zwerger version, I'm going to be honest and admit that I prefer Tenniel's original illustrations. Perhaps because I grew up with them, perhaps because they're just the best and there is no improving on something that is 'the best.' But I will admit that they are good in their own little way.

© Becky Laney of Becky's Book Reviews
Posted by Becky at 10:36 AM

I agree with you 100%, you just can't improve on perfect, and Tenniel's illustrations are exactly what I see when I read Alice. It has always been one of my favorites, too. Very nice review.

Lovely review Becky. I agree that Alice is a magical book and definitely appeals to the dreamer in me. I never read it as a child and I really wish I had.

I love L. Zwerger but I too prefer Tenniel when it comes to Alice. The Arthur Rackham Alice illustrations are great as well but it has to be Tenniel for me. I have a copy of The Annotated Alice that has his illustrations. It is a beautiful book and one I recommend picking up. The info you get from reading the annotations is fascinating and fun.

I've never read this book on my own. An obvious oversight. I love both the illustration you featured and the book cover. Now I'm in a quandry.