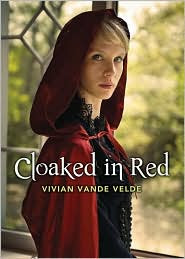 From the author's note: Everyone knows the story of Little Red Riding Hood, the girl with the unfortunate name and the inability to tell the difference between her grandmother and a member of a different species.
The question is: Why do we all know it?
If you look at "Little Red Riding Hood," it's a perfect example of the exact opposite of a good story.

I loved this one. I did. I just LOVED it. Vivian Vande Velde gives readers EIGHT different "Little Red Riding Hood" stories. Each supposed to be 'better' than the original. With more heart and substance. And she definitely succeeded in my opinion. I enjoyed reading these stories. One area in which Vivian Vande Velde excels is in creating great first lines.

The Red Cloak: Once upon a time, after fashion was discovered but before people had makeovers on TV, there was a young girl named Meg.

The Red Riding Hood Doll: Once upon a time, before department stores and designer labels, there was a young seamstress named Georgette.

Little Red Riding Hood's Family: Once upon a time, long after people had found out that their families could sometimes be an embarrassment, but before there were advice columnists you could complain to, there was a girl named Roselle.

Granny and the Wolf: Once upon a time, before online dating services, there was a granny who had an unwelcome suitor.

Deems the Wood Gatherer: Once upon a time, before eyeglasses were invented, there was a nearsighted but good-hearted man named Deems.

Why Willy and His Brothers Won't Ever Amount to Anything: Once upon a time, after books were invented but before TV and movies, there was a girl named Isolda Adeline Genevieve Trenthausen.

The Little Red Headache: Once upon a time, before superhighways and hotel chains, a wolf was journeying through the woods.

The focus shifts in each story. Sometimes focusing on the human characters: the young girl, the grandmother, the woodcutter; other times focusing on the red riding hood (cloak) or the wolf. Many stories do have a twist--as you'd expect in a collection of fairy tale retellings.

You have an award at my blog!

This one sounds like fun, I'm going to look out for it :)