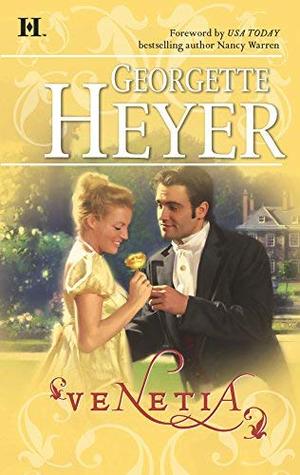 
"A fox got in amongst the hens last night, and ravished our best layer," remarked Miss Lanyon. "A great-grandmother, too! You'd think he would be ashamed!" Receiving no answer, she continued in an altered voice: "Indeed, you would! It is a great deal too bad. What is to be done?"

I love Georgette Heyer. I do. I just love her. Most of her books leave me feeling happy, satisfied. Some more than others. But still, it is always difficult for me to name one book as my favorite. Or even two or three books as my favorites. Just when I think I've found it--the perfect Heyer--I read another and change my mind again. Such is the case with Venetia. I absolutely loved this one.

Venetia is a woman (25) living with her younger brother, Aubrey (17), and being courted by two equally unsatisfying gentlemen of the neighborhood, Edward Yardley and Oswald Denny. The Lanyon siblings do have an older brother, Conway. But he is in the army, and he hasn't been at Undershaw in years. Venetia and Aubrey do not miss him at all. Life is fairly routine for the two. Until. Lord Damerel ("The Wicked Baron") returns to his estate.

The two meet when she is trespassing on his land. He has no idea who she is. But she has a fairly good idea who he is. Especially after he kisses her! Yes, he kisses her.


"Who are you?" he demanded abruptly. "I took you for a village maiden--probably one of my tenants."
"Did you indeed? Well, if that is the way you mean to conduct yourself amongst the village maidens you won't win much liking here!"
"No, no, the danger is that I might win too much!" he retorted. "Who are you? Or should I first present myself to you? I'm Damerel, you know."
"Yes, so I supposed, at the outset of our delightful acquaintance. Later, of course, I was sure of it."
"Oh, oh--! My reputation, Iago, my reputation!" he exclaimed laughing again. "Fair Fatality, you are the most unusual female I have encountered in all my thirty-eight years!"
"You can't think how deeply flattered I am!" she assured him. "I daresay my head would be quite turned if I didn't suspect that amongst so many a dozen or so may have slipped from your memory."
"More like a hundred! Am I never to learn your name? I shall, you know, whether you tell me or no!" (33)

He intends to know her better while he's in the neighborhood. Venetia doesn't need a Lady Denny to tell her that would be unwise. But. When her brother, Aubrey, has a riding accident and is saved by none other than Damerel...well, she can't help getting to know him much, much better. And soon they become great friends. Of course, it's a friendship with always a hint of something more...

Lord Damerel isn't the only newcomer to the neighborhood. Soon Venetia and Aubrey welcome TWO very unexpected house guests. Conway has gotten married--her name is Charlotte. And Charlotte and her mother have come to stay at Undershaw. And the mother is quite the character. How long can Venetia stand to share a home with such a woman? Venetia begins to think about her options...and wishing it was more socially acceptable for her to set up her own home.

The romance. Venetia and Lord Damerel make a great couple. There is such chemistry from the start! Every scene with these two is satisfying! It was a joy reading this one.


He released her hands, but only to pull her into his arms. "When you smile at me like that, it's all holiday with me! O God, I love you to the edge of madness, Venetia, but I'm not mad yet--not so mad that I don't know how disastrous it might be to you--to us both! You don't realize what an advantage I should be taking of your innocence!" He broke off suddenly, jerking up his head as the door opening on to the passage from the ante-room slammed. (221)

Venetia is a Georgette Heyer romance that does not follow her usual pattern.

The audiobook! Wow, wow, wow! I LOVED listening to Venetia. I did read the book first, so I would be familiar with the story, the characters. But then I listened to this one. And it was so very satisfying! I didn't think it was possible for me to love Lord Damerel more than I already did...but hearing the part read by Richard Armitage...wow!!! He does such a wonderful job with all the characters!

The Convenient Marriage is the next Georgette Heyer audiobook to be narrated by Richard Armitage. It releases in August 2010.

In August, Austenprose will be celebrating Georgette Heyer! The month long celebration includes: "thirty-four book reviews of her romance novels, guest blogs, interviews of Heyer enthusiast from the blog-o-sphere, academia and publishing and tons of great giveaways." The schedule can be found here.

Well, with that velvety voice, one can't help falling in love with Damerel!
Thanks, Becky, for your enthusiastic review!

Oh my WORD. Richard Armitage reading VENETIA? I've never read any Georgette Heyer and always wanted to. Awhile ago I decided I would start with Venetia and just haven't gotten around to it yet. Your wonderful review (and the possibility of listening to this audiobook) have made it so I need to get on it immediately!

Thanks for the shout out Becky for the Heyer event and for contributing a review. I love Venetia too and Armitage as Damerle, well, if one man was born to introduce millions to the delights of Heyer, he is the perfect choice. I am reading/listening to The Convenient Marriage and it is a pleasure.

Maria Grazia, yes, I agree! I've "fallen" for each of the heroes Armitage has narrated! But I *think* at least for the moment, Damerel is my favorite!!!

Angiegirl, You should definitely give this combination a try! Armitage does a great job narrating Georgette Heyer!!!

Laurel Ann, I am listening to The Convenient Marriage too. I'm ten chapters in--and I am just LOVING it!!! I hope RA does more Georgette Heyer in the future!!!

This was a great read!!! Thank you so much for introducing me to Georgette Heyer. I LOVED the conversations in this book!!!