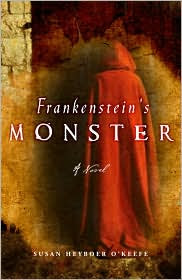 I'm not sure I can say I loved this one. At least not love, love, love. But. I really liked this one. There were places that I just LOVED it--and other places where I began to have doubts. Frankenstein's Monster is a sequel to Mary Shelley's Frankenstein. For the most part, it is set ten years after the original novel.

Time has not treated Robert Walton well. For his brief friendship with Victor Frankenstein has led to madness. After Walton speaks with the monster--the creature--he has no choice (or he claims to have no choice) but to follow in Frankenstein's footsteps. He must see to the destruction of the creature. He must make sure the earth is rid of such a monstrous beast. For better or worse, Walton gives himself over to this one path, one obsession. (It doesn't help that his first 'battle' with the creature lost him a finger.)

But while this is a story of madness, of obsession, of the consequences of extremes, it isn't Walton's story. It is the story of the ever-hunted monster. A monster who is still pondering philosophy--does he have a soul; is he a man, monster, or beast--and dealing (sometimes surprisingly well) with his anger, his frustrations. (After all, he could kill Walton at any time. Why let this mad man chase him all over the world?)

In Frankenstein's Monster we meet the Winterbournes. Margaret, Robert Walton's sister, her husband, who becomes (for a brief time) a father-figure to the monster (now calling himself Victor Hartman), and their daughter, Lily, whose madness is already evident. Lily teases and provokes him like no other woman has ever done. He's drawn to her beauty. And there are times she seems to like him, to accept him, to treat him (almost) decently. But then there are times he sees hatred in her eyes, repulsion, anger, madness. Lily has her violent moments. Her rages. She's self-destructive. In a way, Lily 'reflects' some of his own weaknesses. Could Lily be the companion he's wanted for years?

Frankenstein's Monster is about the monster coming to terms with who he is. He's learning to accept the fact that he can make his own decisions, his own choices, that he doesn't have to be the 'monster' Frankenstein created him to be. He can choose to be better than that. He can choose to live with hope.

The writing was good. I thought it was a compelling story. I thought O'Keefe did a good job with Victor Hartman--showing his strengths and weaknesses, balancing his good and bad impulses. Lily was an interesting character--as were her parents and uncle. I thought the relationship--complicated as it was, complicated as it would have to be--added depth to this one. It took Victor finding a Lily for him to realize some things about himself. And though O'Keefe made a few decisions that I'm not completely happy with--I still enjoyed this one. (There was one scene that I could have done without completely. One of Victor's lowest moments.)

I did like the ending. I would recommend this one to fans of the original. To any reader who has had a little sympathy (or perhaps compassion is the better word?) with 'the monster' Shelley created. It is definitely my favorite sequel/retelling of this classic.