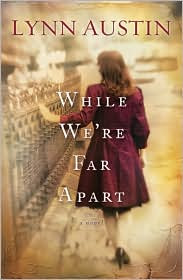 Esther's father halted the lazy swaying of the porch swing. "Listen," he said. "There's something I need to tell all of you." The darkness in his voice made Esther's skin prickle. He had used the same phrase, the same tone, when he'd told her that Mama had gone to live up in heaven.

Once again, the story is told through alternating voices. Esther, a young girl coming-of-age at this difficult time, Penny, a young woman who is finally gaining her independence from her strict parents, Jacob, a Jewish landlord mourning the loss of his wife, a man deeply worried about the fate of his son, daughter-in-law, and granddaughter in Hungary, a man who is angry at God.

The novel opens with Eddie Shaffer making an announcement. He's enlisted in the army. He's looking for someone to take care of his two children--Peter and Esther--for the duration of the war. Since his mother is unwilling or unable, Penny, the girl-next-door, volunteers. She's had a big crush on Eddie for years. And now that he's a widower, he's "available" again. She knows it's a big commitment--a commitment that her own parents just don't understand no matter how many times she tries to explain it--but she's happy to be needed. She'll move--temporarily--into his apartment in Brooklyn so that his children won't need to change schools, so their lives won't be as disrupted by the sudden change.

Soon before Mr. Shaffer leaves, the Jewish synagogue across the street from his apartment burns down. Jacob Mendel happens to be the first on the scene. And as angry as he is with God, he can't allow the Torah scrolls to be destroyed. Not if there's a chance he can save them. So in he rushes into the burning building. The landlord Penny meets is a man very much in need of a friend. And it's friendship he finds...first with Peter and Esther...and later with Penny.

While the novel--for the most part--is set in America, it does present some of the horrors of the Holocaust through letters. As Sarah waits not knowing her fate, the fate of her husband and daughter, not knowing when Hitler will make his next big move to eliminate Jews. At first I wasn't sure if these narrative letters "fit" with the rest of the novel. But. I think it worked for the most part. I enjoyed learning that Raoul Wallenberg was a real hero.

Penny, Jacob, Esther, Peter, and Sarah (Jacob's daughter-in-law) are individuals in need. While We're Far Apart is very compelling, very dramatic (but not melodramatic), very human. I loved these characters. I loved how human they were, how complex they were. I loved their brokenness. I loved how they came together, how friendships developed slowly, how deep wounds began to heal.

I would definitely recommend this one. If you're interested in World War II, in historical fiction, then this one may work well for you.

© Becky Laney of Becky's Book Reviews
Posted by Becky at 7:54 AM

This sounds great! I'm adding it to my to-read list.

I love Lynn Austin. (my favories is All she ever wanted)I wonder if my local library has order this book?? Thanks for the review.