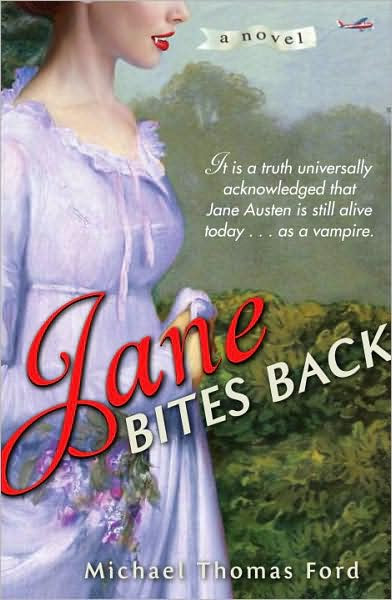 It was not, of course, exactly what Jane had written to her sister that long-ago Christmas Eve, but the sentiment was the same. Besides, after more than two-hundred years, she could hardly be expected to remember every little detail of her voluminous correspondence. Although she supposed she could check for herself--there was a collection of her letters sitting on a shelf not ten feet away. Instead, she remained where she was and imagined how she would describe the disagreeable woman standing before her in a letter to Cassie.

Michael Thomas Ford imagines Jane Austen to be living in a small town in Upstate New York under the name Jane Fairfax. She is the owner of an independent book store. A book store that happens to have its own Austen section. (It even sells Jane Austen finger puppets!) In addition to running her own business, she's busy sending off her manuscript, Constance. It has received hundreds of rejections in the past two hundred years. Making Jane question if her best work is behind her after all. But she's not giving up. No, she's too determined for that. And soon after the novel opens, her luck does begin to change. It seems that Constance has finally found a publisher. Will this new book bring her good attention or bad? Can Jane Austen handle what bloggers have to say about her newest work? It seems one blogger in particular has it out for her! Violet Grey.

When she's not busy with books, is there time for love in her life?! Jane Austen may just meet her true love yet. But will he be able to accept the fact that she's been keeping a few big secrets from him, from everyone?!

I found Jane Bites Back to be very enjoyable! It is not without its violent moments, however, so it may not be for every Austen fan. But. For those that can entertain the idea of Austen being a vampire--though not a sparkly one--there is much to appreciate in Michael Thomas Ford's book.
One of my favorite elements of this one--though I won't spoil it in this review--is just who turned Jane to begin with! And this certain someone with a huge ego, does play a part in the novel! Which I just loved. Do we meet other vampires? Yes! Just a few. But still. I thought both vampires added a certain something to this one. What I enjoyed most about this one was the humor!

Jane Austen as a vampire--great concept. If you and your readers are looking for some more vampire books to sink your teeth into, check out this Guide to Vampire Fiction.

I am a huge fan of Jane Austien's Pride and Prejudice, so to come across a book like this leaves me quite horrified.

As Pride and Prejudice is one of the classic books, what kind of torch could this book hold to it?

Don't get me wrong I am a massive fan of paranormal romance books and have done a number of reviews over on our site We Read It Forums on Vampire paranormal romance. I just don't think I would be able to look past the fact this is trampling on Jane Austen's Character.

I feel the same way about Pride and Prejudice and Zombies, just how can you re-invent something people already know and love so well?

(BTW I love the site you have going here, if you ever want to join us over at wereadit and let us know when you do a new review please please do so -_-)

Awesome site. This book also sounds like a fun read, in my opinion. I'll have to check it out (after I get through the books I have downloaded on my iPad already). Ha. Think my eyes are much bigger than the time I have to read.