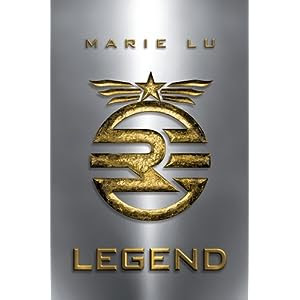 My mother thinks I'm dead. Obviously I'm not dead, but it's safer for her to think so. At least twice a month, I see my Wanted poster flashed on the JumboTrons scattered throughout downtown Los Angeles. It looks out of place up there. Most of the pictures on the screens are of happy things: smiling children standing under a bright blue sky, tourists posting before the Golden Gate Ruins, Republic commercials in neon colors. There's also anti-Colonies propaganda. "The colonies want our land," the ads declare. "They want what they don't have. Don't let them conquer your homes! Support the cause!"

Legend is YA dystopia. Perhaps not YA dystopia at the very, very best. But it is definitely one of the better dystopias I've read this year.  Legend is compelling; it is exciting; it is just a great read.

The novel has two narrators: a guy named Day (Daniel) and a girl named June. Both underwent the "trials" at age 10. June received a perfect, perfect score earning her not only the right to higher education (high school and college) but the right to the best education possible, the kind of education that will prepare her for serving the Republic. Day, well, he didn't pass his trials. And like all other low-scoring 10 year olds, he was sent away to labor camp. Once a 10 year old is sent to labor camp, they're never ever heard from again.

When the novel opens, both teens are about 15. Day is a wanted criminal, an outlaw. He doesn't legally exist in the Republic database, in the Republic records. The authorities don't even know what he looks like--what race or ethnicity he may be. So their wanted posters change quite often allowing for every possibility. (It's the occasional finger print on the crime scene that links Day to particular crimes.) Day is in Los Angeles spying on his family. His older brother, John, is the only one in the neighborhood who still knows he's alive. And it is to John he delivers gifts--food, clothes, medicine, money, etc.  Day becomes worried when his family's home is marked with a red X--a symbol that someone within the home has the plague. This is very bad news indeed.

June, on the other hand, is at the top of her class. Though she's just fifteen, she's almost finished with her training, her education. June is anxious to start working for the Republic, to start serving in the military, to start tracking down criminals like Day. Her wish comes true--but not in the way she expected. She wanted to start working with her older brother, Metias. Instead, she takes his place after he is murdered. And it appears that Day is the one responsible for his stabbing. Metias was trying to stop Day from escaping from the hospital after a break in. (Day was hoping to find plague cures for his family.) June is on a mission, and it is personal. She'll track down Day and bring him to justice no matter what.

The chapters alternate in narrators, and for once I think this is a great idea. Usually, I'm not a big fan of this in novels, but in this case, it not only works, it works well! I was able to care about Day and June--almost from the start!

Legend is action-packed. It's an intense read. But an enjoyable one! I'd definitely recommend it!!!


*My review is based on an ARC.
**Have you seen this list of YA dystopias?!

My Gallery of Worlds said...

I like the sound of this one :D TY for the review

If you liked this book, you may also enjoy "Miss Garrote" by Victoria Newhope. It's about a girl spy, rat ways (a system of underground tunnels dug under Europe), a clan of the Untouchables, the descendants of Templars, and many other cool things. Very interesting book.