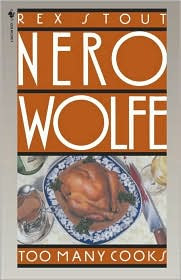 Walking up and down the platform alongside the train in the Pennsylvania Station, having wiped the sweat from my brow, I lit a cigarette with the feeling that after it had calmed my nerves a little I would be prepared to move the Pyramid of Cheops from Egypt to the top of the Empire State Building with my bare hands, in a swimming suit; after what I had just gone through. But as I was drawing in the third puff I was stopped by a tapping on the window I was passing, and, leaning to peer through the glass, I was confronted by a desperate glare from Nero Wolfe, from his seat in the bedroom which we had engaged in one of the new-style Pullmans, where I had at last got him deposited intact. He shouted at me through the closed window: "Archie! Confound you! Get in here! They're going to start the train! You have the tickets!"
I yelled back at him, "You said it was too close to smoke in there! It's only 9:32! I've decided not to go! Pleasant dreams!"
I sauntered on. Tickets my eye. It wasn't tickets that bothered him; he was frantic with fear because he was alone on the train and it might begin to move. He hated things that moved, and was fond of arguing that nine times out of ten the places that people were on their way to were no improvement whatever on those they were coming from. (1-2) 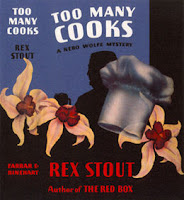 Too Many Cooks starts off great. The first chapter provides so many laughs! As readers witness Archie and Nero Wolfe at their absolute best. Nero being made so vulnerable through his fear of the train ride ahead. Nero being so pathetic as he pleads for the recipe of his favorite-and-best sausage. And, of course, readers witness Archie's weakness as well--as he meets a beautiful young woman. (The daughter of a famous chef, the chef Nero is pleading with so enthusiastically!) Both Nero Wolfe and Archie Goodwin are on their way to a West Virginian spa. Nero Wolfe is even the guest of honor. He'll have the privilege of making a speech on American cuisine.

Ten of the world's greatest chefs will be gathering at Kanawha Spa. These chefs are elected members of Les Quinze Maitres. Among the celebrating, the speech-making, the tasting, the drinking, the dancing, the gossiping, they'll be electing three new members to replace those that have died since the last big gathering. (I believe they meet every five years?) There is much jesting, much teasing, much quarreling between members. And this leads to one making a boast and setting up a game--a test. It seems to be all in fun.

But then, this chef ends up dead.

Nero Wolfe and Archie Goodwin are on vacation. And at first Nero has no interest at all in 'helping' solve this one. But when this investigation complicates his plans to return to New York, his return to routine, he becomes more cooperative. Can Archie and Nero solve this one before anyone else gets hurt?

I liked this one. I just LOVED the first chapter or two. But this one has its squirmy moments, its awkward moments. You could say it shows its age in race relations. The use of the n-word, for example. The way African Americans are treated with hostility, disrespect, and mistrust by the local police and with condescension and kindness by Nero Wolfe. The way Archie is shocked or startled by the appearance of fourteen African-Americans outside Wolfe's door, they are there to be "questioned" by Wolfe as he tries to solve this one. He doesn't trust the police to do it right. And the way the murderer uses blackface as a disguise when he commits the crime. But it isn't only the treatment of one race or ethnicity that makes this one squirmy. The matter-of-fact way they speak about the Chinese wife of one of the chefs, an eyewitness to the crime. (The police may or may not believe her story. She is Chinese after all.)

There are many things about Too Many Cooks that I did enjoy. There were many things that made it a pleasant read, a satisfying read. It's a good mystery. And the dialogue between Archie and Nero is not to be missed. These two are so much fun! They are two of my favorite characters ever created. But I can't say that it's a perfect read.

Some of my favorite quotes:


"I am not deaf, sir. And while you can beef as much as you want to, because it's your own breath if you want to waste it, I do object to your implying either in word or tone that I am in any way responsible for your misery. I made this speech up last night, knowing that I would need it. This is your idea, this trip. You wanted to come--at least, you wanted to be at Kanawha Spa. Six months ago you told Vukcic that you would go there on April 6th. Now you regret it. So do I. As far as our engine is concerned, they use only the newest and best on these crack trains, and not even a child--" (3)

Archie on love at first sight:


It takes a long time to know people. How are you going to tell about anyone until you know them? Take love at first sight, for instance, it's ridiculous. That's not love, it's just an acute desire to get acquainted. (23)

Archie being surprised by Nero:


For ten years I had been accustomed to being as sure of finding Nero Wolfe where I had left him as if he had been the Statue of Liberty, unless his house had burned down, and it was upsetting, not to mention humiliating, to find him flitting around like a humming bird for a chance to lick the boots of a dago sausage cook. (34)