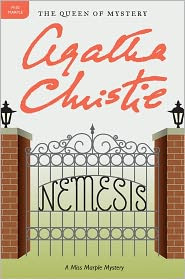 In the afternoons it was the custom of Miss Jane Marple to unfold her second newspaper.

I wouldn't say that it's essential that you read A Caribbean Mystery before reading Nemesis. But. If you have read it, you might appreciate Nemesis more.

Nemesis opens with Miss Marple reading about the death of Mr. Rafiel in the newspaper. She met him in the Caribbean, and he was her greatest ally there when she was busy solving that mystery. She liked him a good deal, even though they never reconnected in England afterward. And Mr. Rafiel had great respect for Miss Marple!

One day Miss Marple is contacted by Rafiel's lawyers. They have something important to tell her. It seems that Mr. Rafiel left her a final challenge, a final mystery to solve.

Have you read the book of Daniel? Do you remember when King Nebuchadnezzar dreamed something disturbing and wanted help interpreting that dream. He asked all the wise men for help. But. He refused to tell them the dream. They must come up with the dream and the interpretation. If they weren't able to do both, then they'd be killed.

Nemesis reminded me of this Bible story. For Mr. Rafiel has not provided Miss Marple with any details. Not a where. Not a when. Not a how. Not a who. Not a why. Her greatest chance for solving this one and earning the money he's left her, is for her to go on the vacation he's planned for her: a tour group traveling by bus through England visiting beautiful, historic homes and gardens.

Can Miss Marple do the seemingly impossible?

I enjoyed this one. I wouldn't say it is my favorite Miss Marple mystery. But I'm very glad my library got a copy of this one! (And very happy that HarperCollins has recently published such lovely editions of the Miss Marple mysteries.) If you don't mind a couple of small spoilers, I have something to discuss at the end of this post.


"I don't think I know exactly what you mean."
"You are being careful. You are quite right to be careful."
"I have made it a habit," said Miss Marple.
"To be careful?"
"I should not put it exactly like that, but I have made a point of being always ready to disbelieve anything that is told to me." (127)

I was disappointed with the way rape was presented in Nemesis. The discussions about rape in the novel were unsettling to say the least. Now, these words weren't coming from Miss Marple herself. So I don't blame the character of Miss Marple for these careless and harmful words.


"That told against him, of course. Not in the jury's mind, because of course they did not hear about that until after the judge's summing up, but certainly in the judge's mind. It told against him, but I made a few enquiries myself afterwards. He had assaulted a girl. He had conceivably raped her, but he had not attempted to strangle her and in my opinion--I have seen a great many cases which come before the Assizes--it seemed to me highly unlikely that there was a very definite case of rape. Girls, you must remember, are far more ready to be raped nowadays than they used to be. Their mothers insist, very often, that they should call it rape. The girl in question had had several boyfriends who had gone further than friendship. I did not think it counted very greatly as evidence against him." (136)


"Well, we all know what rape is nowadays. Mum tells the girl she's got to accuse the young man of rape even if the young man hasn't had much chance, with the girl at him all the time to come to the house while mum's away at work or dad's gone on holiday. Doesn't stop badgering him until she's forced him to sleep with her. Then, as I say, mum tells the girl to call it rape." (165)

These passages made me angry! They did. I wanted to shout at the book. So it's only rape if the woman is a virgin? So the fact that a woman says yes to one man means that she doesn't have the right to say no to any other man...ever? So women are "ready" to be raped? In fact they are out pursuing it?! They are "badgering" and "forcing" them to have sex. Yes, that's right, these poor guys are the victims. Accusing someone of rape is SO MUCH FUN that the women just can't help themselves. They're just begging to be assaulted and raped so they can tell their story to anyone and everyone dumb enough to believe them. What kind of crazy logic is this? It's just wrong on SO MANY levels.

Hello Becky. Thanks for the interesting and thought provoking review. Will you add it to the Agatha Christie Blog Carnival?

I'll come back and read the spoiler parts after I've read the book. Thanks for a great review (the part I did read!!)