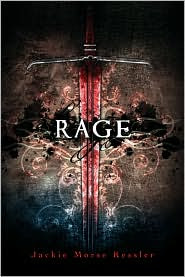 The day Melissa Miller killed her cat, she met the Angel of Death. Except he was no angel--and he wasn't there for the cat.

Rage is a follow up book to Hunger by Jackie Morse Kessler. While Hunger was about a teen girl with an eating disorder becoming Famine, Rage is about a troubled young woman, Melissa Miller--or Missy, becoming War.

Missy Walker cuts. Very few people in her life know about her cutting--her self-mutilation--but that number is about to become a lot larger. For her ex-boyfriend, Adam, has either placed a bet--or accepted a bet--that he can get Missy naked at the party to reveal all her scars for the crowd at Kevin's party that Friday night. (Either way, Adam shows there is a good reason he's an ex.)

Missy hasn't really felt comfortable partying--at least not lately. But with encouragement from Erica, an old friend that she's distanced herself from, and Adam, who is reaching out to her saying how much he misses her since their break up, well, in a moment of weakness she decides to go. (Of course, if she'd stayed home, the novel would be much shorter!)

After Missy is deeply humiliated, she returns home--ashamed and angry, overwhelmed with emotion--and she decides to cut herself. She takes out her blade and begins hoping that it will help her be able to breathe again, that the emotional pain will lessen as the physical pain begins. But before she even knows it, it's all too much. There is too much blood, she wasn't careful enough. She's dying and knows it will look like suicide.

But Death hasn't been watching her the past few days without good reason. He steps in, if you will, and offers her a choice. Die or become one of the four riders of the apocalypse. To be more precise, become War, and take up War's Sword.

Will Missy learn to deal with her darker emotions. Will having control of the Sword help Missy conquer her own demons, her own darkness? Will she learn to use those dark emotions responsibly? Or will they conquer her?

For the most part, I thought Rage was well written. The blend between real life and fantasy is intriguing, I must say. The writing is strong and powerful. While I still had a few questions--when did Missy begin cutting herself, does she know why she does it--the novel works for me most of the time. I do wish, however, that the epilogue would have been handled differently. (Not necessarily the content. But the style. How the novel itself only covers four days, but the epilogue covers two months. How the novel does a great job of showing and not telling. But the epilogue was too telling, if that makes sense. The narration of it was just off for me. I understand that people want a hopeful ending, an ending that leaves no doubts or questions, but it just felt too much to me.)

Have you read this one? What did you think?

Wow this story sounds very dark, yet I am intrigued. Was the narration too off track by the epilogue? I'm looking for more books too read and I haven't seen this book on local selves. Is it worth it for me to go search for it?

http://brit-bug-42.blogspot.com/
My blog for YA book reviews :D