Crocodile on the Sandbank 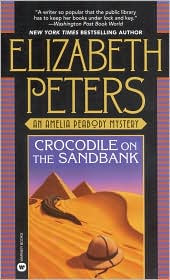 
When I first set eyes on Evelyn Barton-Forbes she was walking the streets of Rome.

Amelia Peabody is intelligent, wealthy, stubborn, and ambitious. Not one to be bossed around by just anyone. So when she goes traveling in Egypt with her companion, Evelyn Barton-Forbes, expect some trouble, some conflict. Then again, to be fair, trouble seems to have followed HER to Egypt--or more precisely followed her companion. For Evelyn Barton-Forbes has secrets--not from Amelia Peabody--but from others in their company. And these secrets may be the needed clue to solve the trouble to come.

The real fun begins when Amelia and Evelyn meet two brothers--the Emerson brothers. Radcliffe and Walter. Both Egyptologists, though one likes to get his hands dirty and one wouldn't mind staying inside and just translating texts as opportunities arise. For Walter and Evelyn, well, it's love at first sight. But for Radcliffe (almost always called Emerson) and Amelia (almost always called Peabody), it's anything but love! Or is it?!

So these four meet early in the novel, but the two really have no plans of joining the others on their expedition. Amelia Peabody has detailed plans of her own--but her wandering leads her straight to Emerson and his latest find. Among his discoveries--a mummy. So her intense interest in his work persuade her to change her plans. And when the mystery starts, well, she could hardly walk away from him then....

I'm not sure that I loved this one. I liked it. I really liked it in some places. The tension between Peabody and Emerson is interesting--how their relationship develops from hate to respect to love. (Similar to Elizabeth and Darcy, I think.) I liked the Egyptian setting. And the mystery is nice enough. But I wasn't as charmed as I wanted to be. I enjoyed it. I found it an entertaining read. But I can't really say that Amelia Peabody is my new favorite heroine.

This series was one of my Mom's favorites. (She lost her battle with cancer 2 years ago.) I agree with you, I could read them but they were never my favorites. Thanks for the memory though! :)

Never heard of this one, might try it.Thanks! for the review.

Book 2 is better. The series starts getting REALLY juicy once Amelia and Emerson have their kid and he starts having adventures.

I would definitley encourage you to move onto the next book in the series! The dynamic becomes more interesting, and there is a later story arc that I just loved!