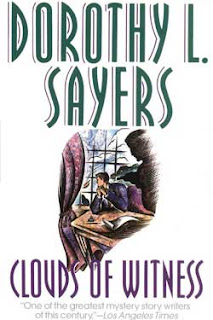 Lord Peter Wimsey stretched himself luxuriously between the sheets provided by the Hotel Meurice. After his exertions in the unraveling of the Battersea Mystery, he had followed Sir Julian Freke's advice and taken a holiday.

Lord Peter's holiday is disrupted by shocking news! His sister's fiance, Captain Denis Cathcart, has been murdered, and his brother, the Duke of Denver, Gerald, is the number one suspect. He was spotted standing over the dead body at 3AM outside his home. Lady Mary Wimsey, the sister, was too shocked to make much sense in her statements to the authorities.  Lord Peter Wimsey (and Bunter) arrive to help decipher the clues in this case, in this investigation.

His family isn't exactly helping him. His brother won't say a word in his own defense. Won't let anyone--not even his brother--know where he was on the night of the murder. And his sister? Well, Lord Peter has his suspicions--as does Parker (Scotland Yard)--that she's not telling the whole truth. In fact, her story is a string of lies. So Lord Peter begins to expand his search to the surrounding neighborhood...

I love Lord Peter Wimsey. I do. I just LOVE him. (Just don't ask me to choose between Archie Goodwin and Lord Peter Wimsey--because at the moment, I don't know that I could!!!!) I would have loved to read all the Lord Peter Wimsey books in order, but, I didn't own them all when I first began my adventure into vintage mysteries. So I'm catching up now! According to Wikipedia, the proper order of the books are:
While I wouldn't say that Clouds of Witness is as good as say Strong Poison or Gaudy Night, I must say it is still a fun read!


"True, O King. Well, you've sat on all my discoveries so far. Never mind. My head is bloody but unbowed. Cathcart was sitting here--"
"So your brother said."
"Curse you, I say he was; at least, somebody was; he's left the impression of his sit-me-down-upon on the cushion."
'That might have been earlier in the day."
"Rot. They were out all day. You needn't overdo this Sadducee attitude, Charles. I say Cathcart was sitting here..." (38)


"I say, I don't think the human frame is very thoughtfully constructed for this sleuth-hound business. If one could go on all-fours, or had eyes in one's knees, it would be a lot more practical." (48)


"Did you ever read The Lay of the Last Minstrel?"
"I learnt a good deal of it at school," said Parker. "Why?"
"Because there was a goblin page-boy in it," said Lord Peter, "who was always yelling 'Found! Found! Found!' at the most unnecessary moments. I always thought him a terrible nuisance, but now I know how he felt. See here." (52)


"Lawyers enjoy a little mystery, you know. Why, if everybody came forward and told the truth, the whole truth, and nothing but the truth straight out, we should all retire to the workhouse." (62)


With that instinct which prompts one, when depressed, to wallow in every circumstance of gloom, Peter leaned sadly upon the hurdles and abandoned himself to a variety of shallow considerations upon (1) The vanity of human wishes; (2) Mutability; (3) First love; (4) The decay of idealism; (5) The aftermath of the Great war; (6) Birth-control; (7) The fallacy of free-will. (71)


"Mother said--well, I told you what she said. By the way, how do you spell ipecacuanhna?"
Mr. Parker spelt it.
"Damn you!" said Lord Peter. "I did think I'd stumped you that time. I believe you went and looked it up beforehand. No decent-minded person would know how to spell ipecacuanha out of his own head. Anyway, as you were saying, it's easy to see which side of the family has the detective instinct."
"I didn't say so--"
"I know. Why didn't you? I think my mother's talents deserve a little acknowledgment. I said so to her, as a matter of fact, and she replied in these memorable words: 'My dear child, you can give it a long name if you like, but I'm an old-fashioned woman, and I call it mother-wit, and it's so rare for a man to have it that if he does you write a book about him and call him Sherlock Holmes.'" (97)

Hi,
I just stumbled upon your blog and find it very refreshing. I am an avid reader. I love mysteries but have never heard the term vintage mysteries. I'm off to the library to find "Whose Body". Wonderful blog. Congratulations.
Your new fan,
Laurie

Sayers. *Sigh* Have you ever seen the PBS version from the 1980s? Out on DVD and well worth it. They got my idea of Lord Peter perfectly.