Oscar Wilde and the Death of No Importance 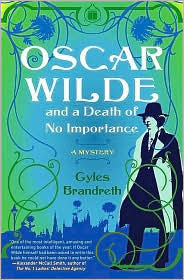 From the prologue: My name is Robert Sherard, and I was a friend of Oscar Wilde. We met in Paris in 1883, when he was twenty-eight and already famous, and I was twenty-two and quite unknown. "You must not call me, 'Wilde,'" he said to me at that first encounter. "If I am your friend, Robert, my name to you is Oscar. If we are only strangers, I am Mr. Wilde." We were not strangers. Nor were we lovers. We were friends. And, after his death, I became his first--and his most faithful--biographer. I knew Oscar Wilde and I loved him.

I was curious about this mystery series starring Robert Sherard, Oscar Wilde, and Arthur Conan Doyle. The novel is set in 1889-1890, in London, for the most part. Oscar Wilde discovers the body of a young boy, Billy Wood, a male prostitute of his acquaintance. Wilde was his tutor, of course. This murder angers him and he turns to his friends, Robert and Arthur, for help. (Arthur, if I remember correctly, is a new acquaintance.) Arthur suggests that they go to his friend Inspector Aidan Fraser for help. Surely this Inspector of Scotland Yard will take on the case and see that justice is done. But sadly no, to everyone's surprise, Billy Wood's death just isn't "big enough" to investigate. But Oscar Wilde is determined and inspired by the fictional Sherlock Holmes, he decides to solve the case himself. He'll follow each and every clue, he'll get the help of some of his friends, and, using his logic and intuition, he'll solve the case. Robert, our narrator, is a little skeptical. How can Wilde solve this one? It's not like they even have a dozen clues to follow. Just a clean floor in a clean room and a missing body. Will that be enough?

I am not sure I liked this one. In fact, there were elements of this one that I didn't really like at all. It is one thing for a murder mystery to have clues hidden subtly and not-so-subtly throughout so that when the big reveal does happen, you feel like you should have seen it coming. Or to admit that though you didn't see it coming, it all makes perfect sense now that all the dots have been connected. But with this one...I don't know if surprise is a strong enough word. Even though Oscar Wilde was quite proud of himself for piecing it all together, even though his version of events, we're led to believe, proved true, I'm still unsatisfied. I don't know if that is because Oscar Wilde did not share ANY of the clues, any of the leads, any of the theories, with our narrator so that Robert remains completely clueless from the first chapter to the last chapter. Or if Robert just didn't have his eyes and ears open. Or if Robert was so obsessed with the Inspector's fiancee that he wasn't thinking at all--let alone thinking logically. Was Robert clueless on purpose so the reader would stay clueless so the big reveal would hold one surprise after another? Or were readers supposed to be solving this case along with Oscar Wilde? Because if readers were supposed to pick up on the 'clues' left by the author...well, I'm only one reader, but it didn't work for me.

I did like the writing, for the most part. There were passages that I really enjoyed. I just wasn't satisfied enough with the mystery of this one.


It is curious how little we remember--even of experiences that seemed so vivid at the time. The mind's eye is not a camera: it is an artist's brush. It provides no photographic record, alas. It can bring back the colour of the day, the feeling of the moment, but the detail is all gone. It's an adequate instrument for poets and painters, but for detectives--useless! (215)

For most of the journey home his nose was buried in a book. We all read--or pretended to. I leafed slowly through my vade mecum--my annotated edition of the maxims of La Rochefoucauld. Veronica pored over a scientific journal devoted to Louis Pasteur's work on immunisation against anthrax. Aidan Fraser read Jerome K. Jerome's Three Men In A Boat--but not, I think, with close attention. He did not laugh once. (270)