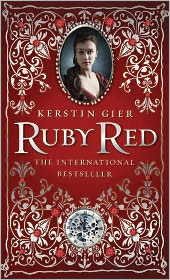 I first felt it in the school canteen on Monday morning. For a moment it was like being on a roller-coaster when you're racing down from the very top. It lasted only two seconds, but that was long enough for me to dump a plateful of mashed potatoes and gravy all over my school uniform. I managed to catch the plate just in time, as my knife and fork clattered to the floor.

Gwyneth Shephard has been waiting and watching knowing that at any minute her cousin, Charlotte, could disappear. For Charlotte has the gene, the time traveling gene that has been passed down through the women in the family. Charlotte has had several dizzy spells the last week, but so far, she's remained in her own time.

How does her family "know" that Charlotte is the one? Well, according to the prophecy--or the prediction--the one will have been born on October 7th. Gwyneth, who was born on October 8th, has nothing to worry about. She's not the one.

Does she want to be the one? She's never really given it that much thought. Every member of her family has their own eccentricity, their own "gift." Even if those gifts are just laughable--such as her great-aunts visions. No one takes those visions seriously. And no one--outside her best friend--takes Gwen's gift seriously, Gwen's gift of seeing ghosts.

So what will happen to this very strange, very dysfunctional family when the "wrong" girl vanishes into the past? For Gwyneth it is beyond confusing. She never knows when it will happen, when she'll be pulled back into the past, at what year she'll travel to, what dangers she may be facing, how long she'll stay before returning to her own time. What Gwyneth needs most are answers to her questions.

But answers are hard to come by. For the guardians like to keep their secrets. And Gideon her traveling companion? Well, what does she really know about him? Except for the fact that he feels cheated or disappointed. So they're not off to the best of starts...

I liked Ruby Red. I'm not sure I loved it. It made me curious, I won't lie. But there are still so many questions. I do feel this is just the beginning, that this was just the prologue for all that is to come. So it's got some promise, some potential. But on it's own, well, it doesn't quite satisfy. It leaves me wanting the next book. (Which is NOT a bad thing necessarily!)

A beautiful book cover, the red and filigree is striking!

This book sounds like it has promise. Is it the first of a series?

My Gallery of Worlds said...

Not sure if this one's for me but the cover IS striking :D

Don't tell the book by it's cover. I hope this is great.

I enjoyed your review - just downloaded sample to my Kindle - thanks, otherwise I never would have come across this book or author.

I absolutely adored the concept of this book. There's not that many books out about time travel in Young Adult Fiction, especially books that are done well and this is one of them. I enjoyed this book a lot they take time to make sure the time travelling characters are dressed in the right place. I admit the plot is a bit predictable but that was something that I enjoyed. Gwen's character did sound a bit young/naive at times but I guess if you're thrown into something that you have no idea about you are going to sound a bit naive about the whole thing.