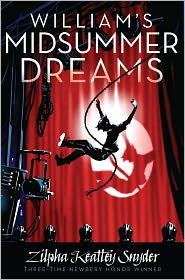 It was on a Saturday near the end of September when the doorbell at 971 Eleanor Street rang long and loud, and then rang again.

In William S. and The Great Escape, William and three of his siblings (Jancy, Buddy, and Trixie) escaped their abusive home and traveled on their own--with a little "help" from a friend, Clarice--to see their Aunt Fiona. They were hoping, of course, that she would be willing to open her home to them. She was. And for the first time in a long time--since the death of his mother--William was able to feel good about his life, his situation.

The first thirty-two pages of William's Midsummer Dreams rushes the reader through nine months of their lives in their new home. (Chapter four, for example, takes us from mid-October to mid-June.) The focus--if you can call anything that abbreviated focused--is on William counting down the days until summer. He is oh-so-excited about the opportunity to audition for a role in Mannsville's summer production of A Midsummer Night's Dream that it is all he can think about, dream about, or talk about. His sister, Jancy, is understandably annoyed. (I thought it was understandable anyway!) He's memorized every one of Puck's lines, every one of his cues. He's READY. He's more than ready. But he can't help being nervous too.

He'll be spending most of his summer vacation in Mannsville with Clarice, Miss Scott, and the rest of the cast and crew. He'll be living his dream, acting in a real production with real actors.

So the novel is ALL about William's adventures in the theatre. The drama that happens on stage and off stage.

If you like Shakespeare OR the theatre OR historical fiction set in the 1930s OR family stories about brothers and sisters, then William S. and The Great Escape and William's Midsummer Dreams may be books you'd enjoy.

Did I like it? Yes. I definitely liked it. I am not sure that I absolutely loved it. (I was a little hesitant about the beginning, it didn't get off to the best of starts.) But. For the most part, I did enjoy this second book about William. I didn't realize until I finished this one how much I missed Jancy and Buddy and Trixie. The novel didn't have quite the same charm as the first one. But what it lacks in family drama, it makes up for in the theatre.

I excited to read this latest from Zilpha Keatley Snyder! I'm glad you liked it!

If anybody is interested-Zoe Marriott is holding a competition on her blog because of the release of her new book, Shadows on the Moon. In the competition you can win three signed books, including her new book, along with other goodies! :)