How Huge the Night 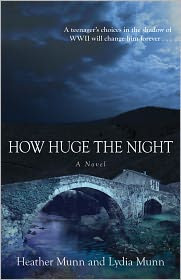 I was disappointed with how disconnected I felt while reading this one. Typically I seek out holocaust (and world war II) books because usually I enjoy them very much. I have come to expect them to be emotional, intense, compelling. I didn't find that to be the case with How Huge the Night.

Julien Losier, our hero, is miserable and unhappy. The threat of war (and then war itself) has turned his life upside down. It has led to his family moving from Paris to Tanieux--a Southern town with a rich historical legacy of welcoming refugees, welcoming those who have been persecuted.

Julien is most unhappy to share his home, his family, his social life (what little he has) with Benjamin Keller, a Jewish boy who is boarding with the family. When war does become official, when the Nazis do invade France, the boy remains safely with the family--despite the fact that there is no way for Benjamin's family to "pay" his room and board any longer.

Julien is unhappy because he's a social misfit in this new town. Every boy in his class seems to reject him. He's not chosen to play on either team when it comes to soccer. Which to Julien is the end of the world. You'd think it was truly a life and death matter. Just as serious as the fate of the Jews in Germany and Austria, etc.

But this isn't Julien's story alone. Throughout the novel, readers get occasional glimpses of Nina (Niko) and her brother Gustav, two Jewish "brothers" trying to escape Austria and find a safe place. Nina doubts such a safe place exists. Where can they go that the Nazis don't follow? Readers, of course, can predict that these two stories must connect--eventually.

It would have been nice, perhaps, to see the story from Benjamin's point of view. To know how he felt about sharing space with Julien--if he saw Julien as being all me, me, me. If he felt like there was a heavy weight on his shoulders--the burden of worry knowing that he may never see his family again, the worry of what might happen if the Nazis do come this far south, the worry that the world may never be "safe" for Jews again.

I had a hard time liking Julien. I really did. I suppose that was the point. That the fact that there's a war on doesn't automatically make teenage boys saints and heroes. The fact that even though there's all this uncertainty, all this chaos, in the world--with Germany invading European countries, with Germany's agenda for persecuting Jews--Julien still thinks that soccer is the most essential thing in life ever, that being popular, being liked, is ever-important.

I am sorry to hear you did not like this one. Just like you I usually enjoy WWII stories and this one sounds interesting. I guess it can happen when you just not connect to the characters. I will give this one a go anyways.

I'm not sure if it was just a mood thing--if I'd have a different experience, a better experience, if I read this one again in a couple of months or a couple of years. Or if I just didn't like the main character!

I do hope that other readers enjoy it more than I did!

I'm so sad. I loved this book. Really loved it. But you are correct books are personal and we all have our likes and dislikes.

I think sometimes it has a lot to do with expectations. You were expecting, as you implied, Holocaust fiction where brave people hide Jews and we get to be on the edge of our seat wondering if the Nazis will find them. Those are good books but Mom and I wanted to do something different. How Huge the Night is the story of a moral awakening, of people not that different from you and me, and we get to wonder, instead, if they will be able to make that step of getting out of their own worlds and understanding how much danger the Jews are in and choosing to put their lives and their families' lives on the line. Because I felt like the usual books can sometimes make the choice sound obvious or easy (as long as you are a good person) but it wasn't always. Those books usually start in about 1943 and by then it was pretty clear the Jews were in severe danger (even though most people still did not know about the death camps, or at most there were rumors--imagine hearing such a rumor!) So that's why our book started in 1939, because during the first half of the war people outside Germany, Austria and Poland had basically no idea. (That's why the boys at school make more of a big deal over Benjamin being German than over him being Jewish.) Maybe I should have emphasized the date more, at the beginning; I didn't have any way of actually telling the reader "Julien has no idea how much danger the Jews are in" because, well, it's from his point of view. He can't tell you he doesn't know what he doesn't know. ;) I tried to hint at it, but I may not have been successful, especially at the beginning.

Well, and I didn't really expect that the book would meet everyone's expectations. That's fine. Thanks for the honest review.

Hello Heather, I had an interesting conversation yesterday with a woman that is buying our home. She was born in the south of France at the end of 1945. Her mother though had lived with her in-laws in Paris during the war and occupation. Her father had been a soldier. Of course my dad is a D-day Veteran of Omaha Beach and she just loved on him. She told us stories about the Jews that just disappeared from Paris where her mother was. And that there were those French citizens that had turned them in, and there were those that were too afraid to help them.
Thank you Heather I loved the book and have passed it on to my sister.

Thank you Becky for letting me post this note.