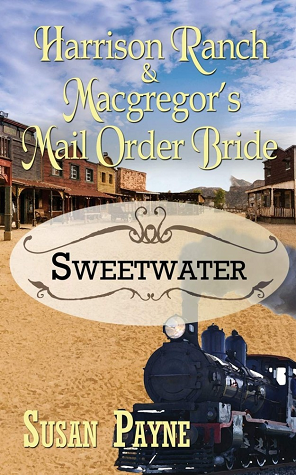 First sentence from Harrison Ranch: Dearest Mother Superior, I know you worried over my loss of position in St Louis but I assure you, I have found myself in a much better situation. I am cooking for the ranch hands at the Harrison ranch outside the small town of Sweetwater, Kansas.

In Harrison Ranch, our heroine, Callie, an orphan raised by nuns, takes a job as a cook on Harrison Ranch. She loves, loves, loves, LOVES to cook. But will she also love to be loved? Perhaps. Seth Harrison, her boss, is super-handsome (and knows it) and begins taking liberties kissing the cook. But are his intentions honorable? Does he have marriage and family in mind? Or does he just want to claim her as his?

In Macgregor's Mail Order Bride, readers have two heroines. Mavis Miller has agreed to marry Joseph "Mac" Macgregor. But she finds herself irresistibly drawn to his younger brother, Jamie. Meanwhile, her best friend, Emily Johnston, finds herself drawn to her friend's fiance. The book ends in two marriages--but who will marry whom?!

My thoughts: I want to start with some positives. It is so easy to see a low star rating and assume that my intentions are mean or snarky. So what did I like about these two novellas? I liked a few things. I like the setting up. The characterization of the heroines in the first few chapters of each novel shows potential; I wouldn't go so far as to say fully realized potential.

I loved Callie's arrival at the ranch. I loved Sully. I loved seeing Callie being friendly with the ranch hands and the sense of finding family and belonging. Callie's tender care for one of them, a stammering orphan that is too young to be a ranch hand, felt right. I really got a sense that Sweetwater would be a series that I loved. (I ended up disappointed in the end, but, I'm sticking with the positives right now.)

I enjoyed Emily and Mavis' arrival and settling in. I was curious about both MacGregor brothers. I had a feeling that Emily would fall for Mac, and that Mavis would fall for Jamie. I have a bias for mail order stories. I am drawn to them--that and marriage for convenience stories--so I really wanted to love this one.

The second novella was weaker perhaps on this--probably because there were two romances.

So what didn't I like? I'm going to distinguish between my personal preferences--which I'll mention in case your taste aligns with mine, but knowing all the while that the things I don't like may be what you like best--AND between weaknesses in the writing.

I'll start with weaknesses in the writing. She needed a proof reader. Not an automated spell checker, but a real life, flesh and blood proof checker. I didn't highlight everything I saw. But when you're in a "romantic" scene and instead of kissing her shoulder and neck, he's kissing her SHOULD, well, that's just awkward. At another point, Callie tells her hero that she can't "abandon all my principals and beliefs." Principles, dear. At least once the author uses an apostrophe to show plurality. "The mare's do not miss..." "Finely, after supper one night, Seth..." Finally. There was a point where the hero heeled off his boots. I'm not sure if heeling off your boots is a legit thing--or if she meant peeling off???--but it would be a lot easier for the scene if he just took off his boots. And then there's the drinking of EGG NOD. (Egg nog). In the second novel, there was an awkward scene where a train disgorged its passengers. This isn't wrong--it's one of the listed meanings of the word--but it felt like she was trying to use the thesaurus to make her story more sophisticated.

The second novel perhaps because it has two heroines has some awkward narration. Like she couldn't decide between first person and third person. "Oh my, she has to warn Mavis before she sees Mac. Mavis will need to be more collected than Emily was when she first sees him."

Complement when compliment would have been more appropriate. He complemented the meal.

"There was a bottle of Champaign on the table with two glasses and a note from Abby telling them to enjoy it." Champagne.

Then there was that awkward unto the sheets...instead of onto the sheets. I'm not completely sure about the distinctions between onto and unto. So she could be right in using unto. But it stuck out when I read it.

This next is a possible-possible weakness. I felt she RUSHED into the physical in both novellas. It's like, hello my name is...and then BOOM let's make out against a wall for no reason. I felt this was a bit out of sorts for a historical novel set in the 1870s. It felt very modern-day hook-up-ish. I needed more than an instant physical attraction. Some readers might not want there to be a journey of attraction and romance--focused on spending time together talking or doing non-physical activities together--but for me it's a must.

Also in the second novella, she has her two new heroines meeting some of the women who live in town--and though they've literally just met--they start talking about SEX. Granted I've never time-traveled to the 1870s, but, that too felt a little modern to me. Maybe that kind of talk between good friends would be believable and legit. But a total stranger that you just met???

The last is complete personal preference on my part. I felt the novel was out of balance with the amount of smut. Yes, I prefer completely clean, nearly clean, off-scene/off-stage/implied smut to actual actual what-goes-where smut. But the ratio of smut to actual story is off. This was disappointing because the opening chapters showed such potential for actual romance. But instead it's like, well, let's just write a LOT of physical descriptions and forget about the rest of what makes a romance a romance.