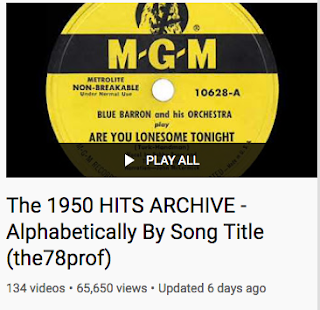 Mom and I just finished listening to the 1950 Hits Archive. Discovering his three channels-- the45prof, the78prof, and anotherprof--has been quite the treat. Here is what he has to say about 1950, "This is a playlist of commercial recordings and songs that proved popular during the calendar year 1950 (some were recorded in 1949) via sales, juke box play, and radio exposure.…plus some others that have gained increased recognition or have been shown to have had an impact during the decades that followed."

There are 4 "All My Love"s. Patti Page. Percy Faith with vocal chorus. Guy Lombardo with Bill Flanagan, vocal. Bing Crosby. By the third and fourth time you are almost singing along--especially on the chorus.

Are You Lonesome Tonight -- Bobby Beers vocal, narration by John McCormick, Blue Barron and His Orchestra. Perhaps Elvis' version is a bit faster tempo, but, otherwise, I don't know that Elvis added anything "new" to the arrangement or style of this one. Even the narrated bit is word for word. The prof adds, that "The song dates back to the 1920s and was recorded over the years sometimes as a straight waltz ballad and sometimes including a variation of the spoken interlude heard here and on the famous Elvis version of 1960."

There were 4 "Bewitched"s. According to the prof, there were eight different recorded versions releasing in 1950! But he only included 4. (I wish he'd list the others so I can look them up!) Mel Torme. Doris Day.

Bibbidi-Bobbidi-Boo PERRY COMO. This is PURE MAGIC. I've decided that the original Barbie (1959) DEFINITELY had this record as a child--as she would have been the perfect age to go to the theatre to see the Disney movie when it released.

Bye Bye Baby -- Tony Martin. He writes, "Though “Diamonds Are A Girl’s Best Friend” is today the most famous of the Leo Robin-Jule Styne tunes from “Gentlemen Prefer Blondes,” Bye Bye Baby” was the show’s most popularly heard song during the initial months of its Broadway run and a top-20 hit on the Cash Box record charts."

Can Anyone Explain? The Ames Brothers

I Said My Pajamas (and Put ON My Prayers) Tony Martin & Fran Warren.

I Wanna Be Loved -- The Andrews Sisters and Billy Eckstine's version.

I'll Always Love You -- Dean Martin; the78prof writes, "Though a couple of his previous recordings had received some radio airplay, this movie song resulted in Dean’s first-ever appearance on Billboard’s best-sellers chart. The film, a Marie Wilson vehicle “My Friend Irma Goes West,” was the second feature film appearance for the Dean Martin-Jerry Lewis team."

Lucky, Lucky, Lucky Me -- Evelyn Knight. If you're thinking the TUNE is super familiar but you've not heard the song before...it's an "adaptation" of an Italian folk melody.

There were 4 of Nevertheless. Ray Anthony. Paul Weston & The Norman Luboff Choir. The Mills Brothers. Ralph Flanagan, Harry Prime vocal. By the third time I was LOVING it...

There's No Tomorrow -- Tony Martin. The prof writes, "here’s No Tomorrow (Hoffman-Corday-Carr) by Tony Martin, orchestra conducted by Henri Rene “O Sole Mio” “It’s Now Or Never” “There’s No Tomorrow” Following his more than a decade of only moderate success, this versatile Neapolitan tune of 1898 provided singer Tony Martin with the type of blockbuster hit record that would help define the rest of his lengthy performing career. The million-seller reached #2 nationally and--most unusually for a popular ballad hit--not a single competing version even showed its face on the record charts."