The Knife Of Never Letting Go 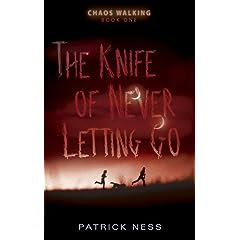 The first thing you find out when yer dog learns to talk is that dogs don't got nothing much to say. About anything.

This book perhaps has one of the best first lines I've encountered recently. Unfortunately, at least as I see it, it only went downhill from there. Okay, that was NOT at all fair. I'll try to explain.

Todd Hewitt is our narrator. He is a boy on the verge of becoming a man. Except that he's no ordinary boy. He's the last boy in his town of Prentisstown. And that means much more than even he realizes. Prentisstown is one of many towns in New World (a planet far, far away). But it's an isolated town. Though Todd is unaware of its history and legacy.

This is no ordinary human settlement. No, the men can hear each others thoughts. Read each others minds. Take a settlement of a hundred or so men (and boys) and you've got a LOT of noise to live with in your head. Noise that can drive a man to do crazy, crazy things.

There are no women in Prentisstown. In fact, Todd thinks there are NO women left period. That his mother was one of the last to die. He's been raised by two men, Ben and Cillian, and it's been a hard but good life for the most part. Though the last few months have been rough. As the last boy, he's had no friends. Once boys become men, they can't play around like they used to. Can't associate with mere boys anymore.

But with less than a month away from his birthday, Todd discovers a handful of things that will change his life forever. One, he discovers a pocket of silence. This may not seem like much. But to him it means everything. But this discovery rushes another shocking fact: Ben and Cillian have been keeping secrets from him. And they're ready to send him out into the unknown...on the run...in an attempt to save his life...and in an attempt to prevent him from becoming "a man" according to the town's tradition.

On his own...but not really....Todd soon discovers that that eery pocket of silence was a girl. A girl named Viola. A girl who is out of this world. Her family (mom, dad, her) landed or crashed there recently. Their ship was a scout ship, there's another colony ship on the way seven months behind the scouting vessel. But Viola's parents are dead. And Viola is on her own...until she's discovered by Todd and his dog, Manchee. Now these three are on the run, and it's a mighty fierce, never-ending chase.

The book is 479 pages of adrenaline-pumping chase. Anything and everything can happen along the way as these runaways run to survive and run to hope. It's a hard struggle between life and death. It's emotionally draining and it pushes and challenges them physically. There are so many near-death scenes it's not even funny...

But here's the thing...after 479 pages...all we get is a big "to be continued" in the middle of it all. No closure. No satisfaction. Just one lousy ending.

Reading is subjective. And despite the fact that this one has two stars going for it, (starred reviews in journals) I just didn't like this one much. If I'm going to like this one...it needs a redemptive ending...an ending that may or may not eventually happen in the second book. (I guess that depends upon if there is a third book.)

Series books can be frustrating. I would *probably* suggest you pick this one up right before the release of the second book so that you can save yourself the angst of an unsatisfying and unfinished read. I would imagine it would be enjoyable then.

© Becky Laney of Becky's Book Reviews
Posted by Becky at 9:29 AM

I am reading this now and loving it so far!

I've read a few reviews of this book and you are the first one I've seen that mentions hope. I personally think that is the key to the ending of the book: hope and despair. We've been taken on a roller-coaster ride of both, and as readers get left in a position of either hoping or despairing at the very end. To say it is just a hook onto the next in a series doesn't do the book justice IMO.

im sure everyone has heard of or read the popular series twilight
and i think this beats it by far. it is the best book ive read yet. and i am eagerly awaiting the next book.
anyway i love this book and highly recomend

Book starts out great but I agree with Becky, just goes downhill. The premise of the story is in fact intriguing and interesting, but, after you get past the intial concepts and ideas of the noise, the secrets, etc., it just becomes a chase that goes on and on and on without anything really new or interesting, just too many near-death experiences with the same villians. Rediculous. By the time the book reveals the secrets you are waiting for, I already figured them out. And the ending was a HUGE letdown; it was shocking how abrupt and OPEN it ended. Cliffhanger is one thing. This is an unfinished book. There is no true resolution in this story at this point and after that many pages, a ready deserves one. I will not buy the second book in the story. At this point I could care less what happens. Too bad because it had the potential to be a much better book.

I read this book last week, part of the Carnegie book awards and throughly enjoyed it. It took me a while to really get into it but now can't wait to read the sequel! At certain parts, it was some of the strongest emotions ever induced by a book i have ever felt. However, I do agree with Becky to a certain extent. The initial concepts of the book are great, but the chase does seem to go on too long with not much happening but running. Overall though, it is one of the best novels I have read in a long time.

Yes, there isn't a "sequel," because it's just a large unfinished story. It also feels like some of the newer movies -- Braveheart and Rob Roy, for example, but some cheesier ones with Stephen Seagall or Chuck Norris, where the villains are simply evil with no particular nuance. A villain who is purely evil might as well be a dinosaur or a volcano, and I was fascinated by the book almost all the way through until there was just one too many "bad scary guy jumps out of nowhere" moment. And then to find out you bought half a book? I don't think I'll pick up the next volume. I really feel cheated by the non-ending and there's no promise of anything more than another set of chases.