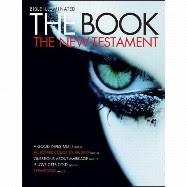 Consider me a skeptic. Not of the Bible. Not of the Christian faith. But of those who would try to dress up the Bible for new audiences. Originally published in Sweden, the brain-child of Dag Soderberg, this book seeks to "introduce today's audience to a revolutionary contemporary Bible, one that encourages dialogue and is culturally relevant, accessible, and easily digestible for any reader regardless of religious, economic, racial, or social background." (quoting the publisher's website.)

Still I was intrigued enough to take advantage of a review opportunity that would allow me to access the book weeks before its release date. I knew several things about the book going into it. One, the format would be (or should be that is since I've only seen it in electronic format) in glossy magazine format/style. Two, the book also would have a liberal sprinkling of contemporary photographs. Both of these are supposed to make the Bible (suddenly) relevant to the modern world, to the modern reader. The reasoning being that it is the lack of pictures, lack of illustrations, lack of media that makes the Bible boring and irrelevant and so often discarded in today's circles.

The Bible translation being used is The Good News Translation. (A.K.A. The Good News Bible or Today's English Version). (The same translation that is used in the film The Gospel of John that came out a few years ago.) This Bible translation has been around since the sixties. And some early editions of this Bible contain stick-figure drawings or illustrations. I know because my parents grew up having this one. And when the stick-figure edition was reprinted a few years ago, I picked up my own copy. There is something so charming about it. I also knew this translation from another edition of this bible. This one had photographs (though not nearly as many as this new book). Originally published in the late sixties or early seventies, the photos soon became dated and more of a detriment than a selling factor or successful marketing ploy.

While the Good News Translation wouldn't necessarily be my first choice as a Bible translation to read on a daily basis for personal growth and study in the faith. It isn't an awful choice either. There are other translations I dislike more. And this translation is one of the more reader-friendly translations. (Other reader-friendly translation options could have been The Message, Contemporary English Version, Today's New International Version, The New Living Translation.) And since the book is designed specifically to draw in new readers, then the translation choice is well made. I don't see any new readers being willing to untangle the language of some of the more traditional translations. (My personal favorite when it comes to translation is The New American Standard Bible (NASB) and the English Standard Version (ESV).) 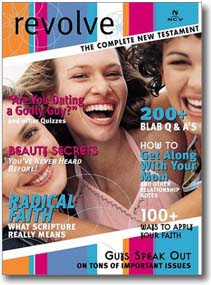 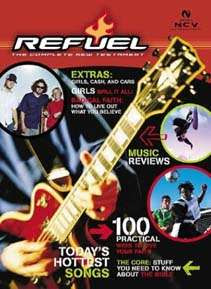 This isn't the first Bible to give the magazine format a try. There is Revolve and Refuel geared towards teen girls and guys respectively.
Still though magazine-formatted bibles and illustrated bibles aren't exactly new or groundbreaking, this new book is more ambitious than anything I've ever seen before. It offers more, more, more visuals to stimulate you. Is this a good thing or a bad thing? Does the Bible need to offer distractions from the text itself? Does it need these visual additions in order to be relevant?

You'll never catch me saying that it does. I think the Word of God can stand on its own two feet. But perhaps this is a cultural thing as well. Perhaps in some cultures, some climates, some regions of the world, of society, there is a drought. A bigger drought that my eyes have never seen or witnessed. A severe lack of the Bible's presence. A genuine need for this type of book. Who knows for sure. And if this is what it takes to "inspire" some people to pick it up and read it through...then how could that be a bad thing?

My thoughts on what I've seen...

I love the Andy Warhol poster which reads "Repent and Sin No More!" as one of the opening images. As for the other images, some I really really enjoyed. I thought they were either a) beautiful b) thought-provoking c) complimented the highlighted passage well. However, there were many that I just had a ??? response to. Pictures that I didn't see the point to. That baffled me. That perhaps disturbed me and not in a particularly good way.

Mark is probably the book that confused me most. Within this book there are pages (probably a dozen or more) of celebrities (a.k.a famous people) included. Because I couldn't understand why Angelina Jolie, Al Gore, Bill Gates, John Lennon, etc. were in there. What do celebrities have to do with the gospel message???

But this book (The Bible Illuminated: The Book: New Testament) does have a social-humanitarian-global focus that I like. Luke highlights eight ways to change the world, for example. And the images within Luke--as opposed to Mark--work for me. They tell me something. They have a point. They're relevant.

So some books really worked for me. Others not so much.

© Becky Laney of Becky's Book Reviews
Posted by Becky at 1:23 AM

Honestly, I think that this will draw some new readers to the bible. It's certainly caught my interest and I'm looking forward to checking it out even though I've never been a big bible reader. It's that whole "went to Catholic school my whole life and had it shoved down my throat" think :p

Thanks for the review Becky. I declined a copy of the book when I was asked to review it. I didn't think it would appeal to my Catholic tastes. Now I know it wouldn't have appealed to me. I don't think I could handle a picture of Angelina Jolie (yuck) in The Bible.

These new formats confuse me. I think you know I'm an atheist, so maybe there's something I don't understand. But to me, it seems there should be a sense of awe and respect to worship. Maybe not somber, but not frivolous, either.

I guess I also think that it's condescending towards teens to think they need this sort of splashiness to attract them to a belief system.

I agree with you mostly, Dewey. :) I *do* think the Bible should have a certain reverence or awe or sacredness about it. I don't think it needs doctoring up to be trendy.

That being said, I agree partly with Chris. I may not want Angelina Jolie in my bible...but if having flashy pictures gets new people interested in actually reading the Bible...that could be a very good thing.

So I'm not going to get all judgmental with these new formats as long as the words themselves aren't tinkered with.