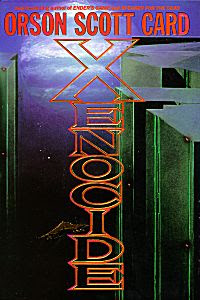 Xenocide is the sequel to Speaker for the Dead. (Speaker for the Dead is the sequel to Ender's Game. Ender's Game is my favorite, favorite book.) Xenocide is an intricately complex plot following the saga of characters (mainly) introduced in Speaker for the Dead. Speaker for the Dead concludes with the threat of the destruction of the planet of Lusitania. Which would mean the destruction of the pequeninos (piggies), the human colonists (including Andrew Wiggin, his wife, his stepchildren, etc.) and the Hive Queen (the Buggers). The Lusitania Fleet has been launched, and the order to destroy the planet using the M.D. Device (Little Doctor) has been given. If it wasn't for Jane, the life-force residing in the ansibles and computers, the impending doom would be absolutely, completely certain. As it is, it is only mostly certain that xenocide will occur once again. (Xenocide being genocide of an entire species. While the human colonists would lose their lives, the human race would go on in the other hundreds of worlds colonized. But xenocide is a very real threat to two alien species: the Hive Queen (and her workers, etc) and the Pequeninos.)

There are so very many characters to keep track of in Xenocide. As I mentioned, most were introduced in Speaker for the Dead. Andrew and Valentine. Andrew's wife, Novinha. Andrew's step-children: Miro, Ela, Quim, Olhado, Quaro, Grego. The piggies of utmost importance are Planter and Glass. (Not counting the fathertrees Human and Rooter, etc.) The Hive Queen of course. Jane, the character that pulls most of the book together. But there are three characters that are brand new to the story. Three people from the Chinese colony of Path: Han Fei-tzu, Han Qing-jao, and Si Wang-mu.

The plot is too intricate and complex to go into all the details. The book is all about life-and-death matters. The colonists are trying to figure out a way to kill the descolada before it destroys them. They hope that if they can destroy it, then perhaps they'll be saved as well. The Hive Queen is busy building star ships. She wants some for herself. But she's also building some for the Pequeninos. She doesn't want another alien species destroyed by human stupidity. But the humans know that while the Hive Queen may be intelligent enough to find a way to kill the descolada from tainting them and their DNA--the Piggies aren't nearly advanced enough to do so. (The descolada is essential for the Pequeninos to survive. It is linked to their DNA. It is how they procreate and continue on in the third life.)

Xenocide is an interesting novel. But one that doesn't stand on its own. It begins in the middle of things, and ends with no resolution. (Or very little resolution.) It's the middle book of a trilogy (in a way) and while it's important...crucial for the progression of the story...it isn't as satisfying in some ways as the others in the series.

I'd like to read this soon, but it has been a couple of years since I read Speaker for the Dead. Reading your review makes me think I should reread it.