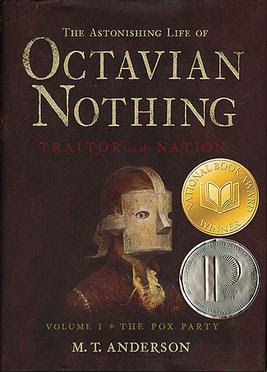 Anderson, M.T. 2006. The Astonishing Life of Octavian Nothing: Traitor to the Nation: Volume 1: The Pox Party.

Let's see...what can I say about Octavian Nothing. It's an award-winning book--winner of the National Book Award, winner of a Printz Honor. It's historical fiction--set in the Colonies right before the American Revolution. It's more literary than your typical teen book--it's heavy in semicolons and rich in detail.

So what is so astonishing about the life of Octavian Nothing? Many things. Many many things. For starters, he's a slave who doesn't quite realize he's a slave. He has little inkling just what he is...or who he is. Who is he? He's a human experiment. He's being studied to determine if Africans are inferior (or equal to) to Europeans. Everything about him is being observed and measured. He's been given the finest clothes, housed in a luxurious way (at least comparatively speaking), taught to play musical instruments, taught in a classical way--learned in many diverse subjects including English, French, Greek, and Latin. He is a child who had a very strange, very odd, very out-there upbringing. Who is raising him the members of the College of Lucidity. Strange men who are fascinated by science, math, philosophy, art, music, etc.

There are several events that change everything for Octavian. That turn his whole world, his whole life, his very being upside down and inside out. Through the course of the book, Octavian goes from a privileged boy who is clueless about the oppression of slavery to a full-grown man who has experienced the oppressive wrath and cruelty of his masters. A man who now longs for freedom.

Even that isn't quite a fair assessment of what this book is about...of what it has to offer readers.

I've been thinking of reading this for a while. Thanks for the review. Sounds like it's one I should read. Fortunately, my library has several copies!

Loved this book! This is the second M.T. Anderson book I've read this year, and I pretty much think he's amazing. What an imagination! What skill with words! It isn't often you read a book that so transports you to a time period where you believe you are actually reading about characters that lived in that era, not 21st century people transported to that era.

I really didn't know what this book was about so I appreciate the review. Thanks!

You've pierce the shell of this book for me better than any other review.

The second one, Kingdom on the Waves, is even better. Excellent review, btw!

I enjoyed your review. I am fascinated about Octavian's fictional life. I wanted to know if such experiement were actually done on African slaves in Colonial times. The book and the author have a lot to offer.
Tom B.